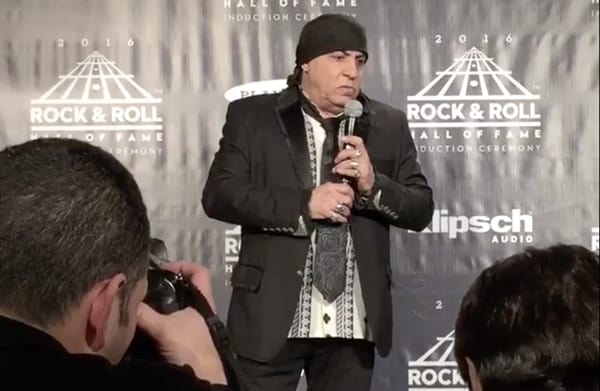 Rocker and E Street Band guitarist Steve van Zandt spoke out backstage at the Rock and Roll Hall of Fame last night, expanding on why Bruce Springsteen decided to cancel his show in Greensboro, North Carolina.

“We just felt the issue was just too important. This really vile and evil discrimination is starting to spread state to state and we thought we better take a stand right now and catch it early and maybe try and stop it. At least set some kind of example for others.”

Van Zandt also spoke with the AP about why they decided to do what they did:

“Should we go there, make a statement from the stage? You consider those things but then you realize that’s just playing into their hands. It’s not going to hurt enough. You need to hurt em economically. It’s the only thing they understand. You gotta hurt people economically and have them do the right thing morally. That’s the essence of a boycott. And it’s a shame that it comes to that, but this thing is spreading like an evil virus around the country. And we felt we should try and stop this right now, early. And hopefully other people will rise up and join us. Hopefully other states will reverse the legislation – I believe Mississippi already has it also. And Georgia just stopped it because of the threat of a boycott.”

Van Zandt then went off on extremism, calling it “anti-American”:

“People in the South, they’re no different than anybody else. And it’s just these complete religious extremists that are really starting to cross that line between church and state. And that’s one of our most honored and important traditions in this country. It’s anti-American to start discriminating against people whether it’s women or whether it’s gay or transgender or whatever it may be.”