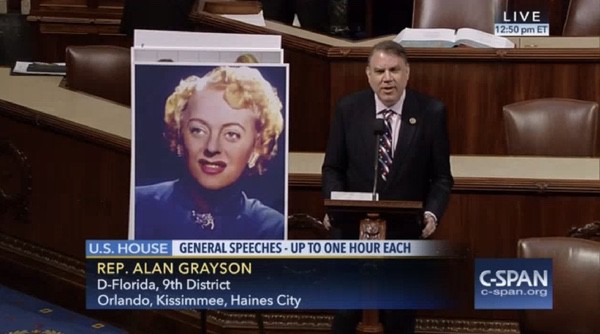 Rep. Alan Grayson (D-FL) took to the House floor on Friday and delivered a rip-roaring presentation against the “bigots” in North Carolina and their anti-LGBT bathroom bill HB 2.

The speech was also historic and groundbreaking, according to the office of the U.S. House Communications Director, which informed Towleroad that it is the first time the word “cisgender” has ever been used on the House floor.

Grayson started out his speech with a history lesson about Christine Jorgensen, the first person to become widely known in the U.S. for having gender reassignment surgery.

“Now, I have to tell you, i don’t know exactly where she went when she had to go. I don’t know exactly whether she went into a men’s room or ladies room, but here’s the interesting thing. Even though this is something new under the sun, even though America never had to address this issue before, no one ever even bothered to ask. I don’t remember anybody saying, ‘Christine Jorgensen, she ought to go to the men’s room, she was born a male.’ Or for that matter, ‘Christine Jorgensen, she identifies as a female, she should go to the ladies room’. Isn’t it odd that America in the 1950’s seems to show — seems to have shown a lot more maturity than America is showing today with our great bathroom controversy right now.”

“Now we have a whole new problem. Now, thanks to Republicans, bigots, in North Carolina, we have a law that would require Christine Jorgensen to go to the men’s room. Think about that. Think about that. In fact, the natural consequence of that law is what i’m about to show you right here.”

Grayson then pulled out this poster: 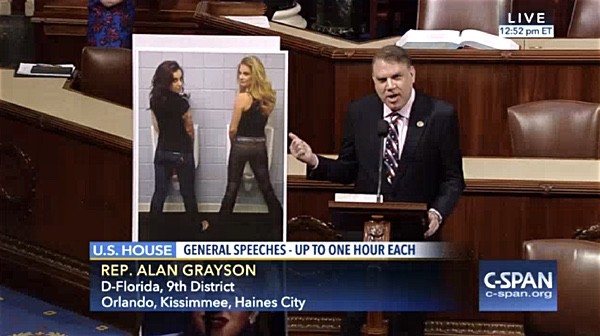 And Grayson was just getting going:

“So you folks in North Carolina who are obsessed with where the transgendered go to the bathroom, this is the result you’ve come up with. People who self-identify as women, people who look like women, people who act like women, they somehow are being driven into the men’s room. And the same thing is true of transgendered who identify as men. You’re going to force people who look like men, act like men, you’re going to force them into a ladies room. My god, what’s wrong with you?”

“That doesn’t make any sense at all. Now, let me tell you something. If I had been, back in the day, growing up in New York, and Christine Jorgensen happened to walk into the men’s room, never happened, but let’s say it did. I would have thought, that’s odd, but I wouldn’t have said a word about it. I wouldn’t have gone over to her and said, ‘excuse me, i don’t think you’re supposed to be here.’ On the contrary, I would have made an appropriate mental note, assume she probably found herself in the wrong men’s room and would have let it go.

Grayson then reminded everyone of real bathroom creepers like former Idaho Republican Senator Larry Craig, and of the civil rights movement.

He also pointed out the real gender issues in the nation with this poster: 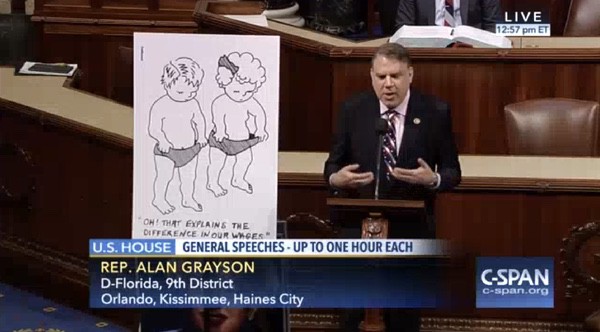 “Now, if we did actually want to deal with real problems, we could deal with this one. A little boy and a little girl both looking into their diapers. And the caption is, ‘oh, that explains the difference in our wages.’ Now, if we want to talk about gender in America in the early 21st century, we could start with that. Why is it that women still make only 79 cents for every dollar that a man makes in countless occupations and professions even today? Why is that? You want to get to the heart of what’s really going on between the sexes in America today, why don’t we do something to address that problem?”