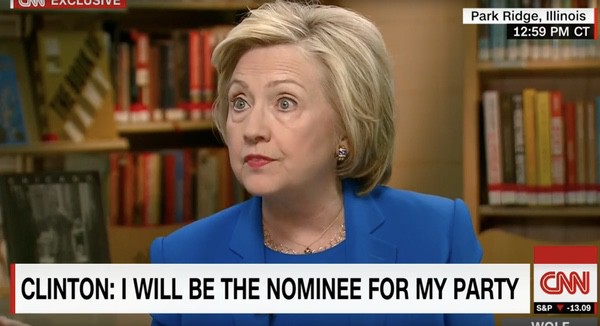 Bernie Sanders’ campaign fired back at Hillary Clinton for telling CNN’s Chris Cuomo on Thursday that she is the Democratic nominee.

“I will be the nominee of my party,” she told Cuomo, “That is already done, in effect. There is no way that I won’t be.”

“In the past three weeks voters in Indiana, West Virginia and Oregon respectfully disagreed with Secretary Clinton. We expect voters in the remaining nine contests also will disagree. And with almost every national and state poll showing Sen. Sanders doing much, much better than Secretary Clinton against Donald Trump, it is clear that millions of Americans have growing doubts about the Clinton campaign.”

The remarks also come after reports from the NYT that Sanders is willing to “harm” Clinton’s candidacy to make his point:

While Mr. Sanders says he does not want Mr. Trump to win in November, his advisers and allies say he is willing to do some harm to Mrs. Clinton in the shorter term if it means he can capture a majority of the 475 pledged delegates at stake in California and arrive at the Philadelphia convention with maximum political power.

Tad Devine, a senior adviser to Mr. Sanders, said the campaign did not think its attacks would help Mr. Trump in the long run, but added that the senator’s team was “not thinking about” the possibility that they could help derail Mrs. Clinton from becoming the first woman elected president.

And the Washington Post editorial board noted the growing backlash against Sanders’ attacks on Clinton and the process this week as well following the threats and violence at the recent Nevada Democratic Convention.

He has attracted some big, passionate crowds. But as he has lagged in votes, he increasingly has questioned the legitimacy of the process and encouraged his supporters to feel disenfranchised. The result is a toxic mix of unreason, revolutionary fervor and perceived grievance.

What is particularly galling about the Sanders camp’s complaints of disenfranchisement is that Mr. Sanders has benefited or tried to benefit from a variety of sketchy quirks of the nominating process. He has claimed support for his cause in caucuses, which are quite exclusive, but he complains about closed primary elections, which are more inclusive. In Nevada, his supporters were trying to game the rules to get more delegates and got upset when they did not succeed. As veteran Nevada politics reporter Jon Ralston put it, “Despite their social media frothing and self-righteous screeds, the facts reveal that the Sanders folks disregarded rules, then when shown the truth, attacked organizers and party officials as tools of a conspiracy to defraud the senator of what was never rightfully his in the first place.”

Mr. Sanders denies reality when he tells supporters he still has a plausible pathway to the Democratic presidential nomination. But passion cannot trump reality. It also cannot excuse violence, threats and attempts at mob rule. It is past time for Mr. Sanders to be honest with his supporters, before they take the campaign’s irresponsible ethos to greater extremes and thereby help ensure the election of Donald Trump.

Last night, Rachel Maddow reported that the Democratic National Committee plans to offer Bernie Sanders seats on a platform committee as a concession.

Previous Post: « Matthew Dempsey and Jimmy Fowlie on Gay Men Who Overshare and Stalk on Social Media: WATCH
Next Post: Oklahoma Lawmakers Want to Impeach Obama for Telling Schools Where Students Should Pee »