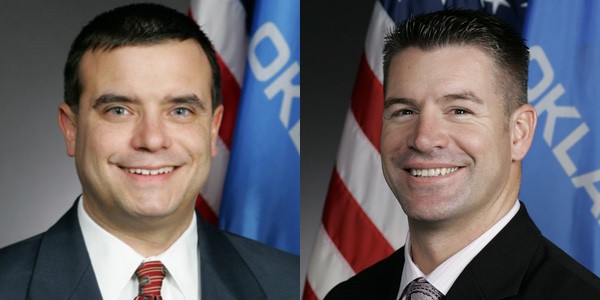 On Thursday, two pieces of legislation were filed. Senate Bill 1619, filed by President pro tempore of the Senate Brian Bingman and Speaker of the House Jeff Hickman, calls for a law that would make student restrooms exclusively for the gender the student was born.

Senate Concurrent Resolution 43, filed by Senate Anthony Sykes (above left) and sponsored by Rep. John Bennett (above right), calls for the U.S. House of Representatives to issue articles of impeachment against President Obama for the bathroom directive.

Said Bennett: “This directive to schools is not only unlawful, but the breadth of overreach in this instance by the Obama Administration is shocking. We are working on legislation that would protect our citizens by not requiring our kids and women to share a facility with anyone who ‘identifies’ as a gender that they were not born. We are going to do everything we can to protect our women and children.”

You can read the bills below:

Previous Post: « Bernie Sanders Fires Back at Hillary Clinton for Declaring Herself the Nominee: VIDEO
Next Post: Nobody Has Ever Loved a Chewbacca Mask More Than This Mom, Now a Viral Star: WATCH »