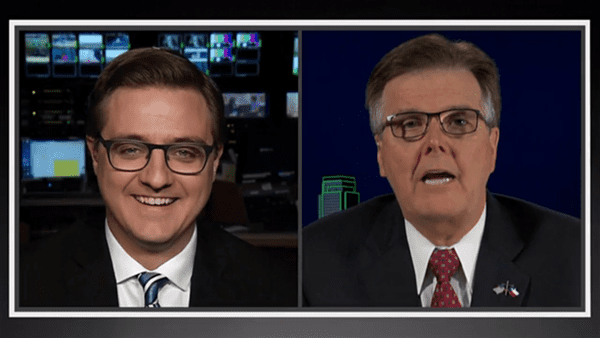 Appearing on All In With Chris Hayes on Friday, Texas Lt. Governor Dan Patrick dodged questions from Hayes about transgender rights.

Patrick failed to answer even the most basic questions posed by Hayes. Said Hayes, “I wondered if we could just start it with some basic clarity on the terminology here. What does the term transgender mean to you.” Rather than answer that question, Patrick preferred to go on a long-winded explanation of how he “got in the middle on this.”

Hayes pressed again, “I just want to start making sure everyone understands each other…When you’re transgender, what does that mean to you, Lt. Governor?”

After a rambling run down on Title IX in which he refuted the DOJ’s argument that Title IX’s protections against sex-based discrimination apply to transgender Americans (an argument backed up by federal court rulings), Patrick finally got to Hayes’ question, and proved he couldn’t answer it. “I can’t give you the definition for every transgender person,” Patrick said.

Later in the interview, when questioned about what he had learned from transgender students, parents and teachers about transgender rights, Patrick deflected again.

Hayes then asked Patrick, “What percentage of complaints, in the state of Texas or Ft. Worth, come from students and parents due to this specific issue that you have devoted so much time too? What percentage?”

And that set Patrick off: “Chris, I feel you’re kind of hostile to the issue. I’m just trying to have a conversation here. You don’t kind of have to take me on.”

Watch as Patrick loses it, below.

Previous Post: « Kit Harrington Explains Why He Scratches His Balls Every Time He Sees an Ambulance: WATCH
Next Post: Gay Short Film ‘A Song For Your Mixtape’ Will Break Your Heart – WATCH »