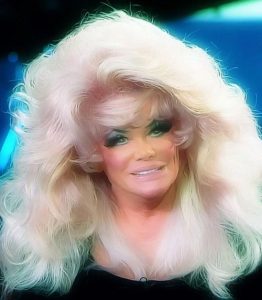 EVANGELICAL CHRISTIANS. Televangelist Jan Crouch has died. She was 78.

WINTER IS COMING. Is Game of Thrones getting more feminist this season?

BATHROOM WARS. 4th Circuit Court of Appeals refuses to rehear case in which it ruled that a transgender student must be allowed to use the bathroom in accordance with his gender identity: “The Federal Court of Appeals in Richmond, Virginia, denied the request, submitted by the Gloucester school system, to re-hear the case brought by a transgender boy, in court documents listed as G.G., but publicly known as Gavin Grimm. In April, the 4th Circuit Court siding with Grimm, upheld a previous ruling that federal civil rights laws include transgender people in cases involving education discrimination, and that Title IX protects transgender students.”

TAKEDOWN. Richard Dreyfuss trolls Donald Trump on Twitter: “The saddest people aren’t Donald Trump’s supporters. They’re really struggling. It’s Donald Trump’s celebrity supporters who are whores.” Of having met Trump once at a party in Malibu, Dreyfuss says, “He acted like a small dicked prick and pusher from the party and left of us wondering if we had made a mistake letter her go with him.” The tweets have since been deleted.

CALIFORNIA. Gov. Jerry Brown endorses Hillary Clinton: “In an open letter to Democrats and independents in California, Brown said he was “deeply impressed” by how well Sanders has done and with his message of the growing divide between the wealthy and the rest of Americans. But Clinton knows how to get things done and advance the Democratic agenda, the governor said. He pointed out that she has approximately 3 million more votes and hundreds more delegates than her rival. Also, she needs to win only 10% of the remaining delegates to clinch the nomination, he said.”

CELEBRITY INSTAGRAM. Shawn Mendes shows off his buff back.

And Baby Daddy star Derek Theler shows off his patriotism. 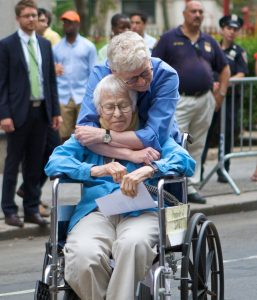 RIP. Connie Kopelov, one half of the first gay couple to get legally married in New York City, has passed away at 91: “Ms. Kopelov and Ms. Siegel had been partners for 23 years when they were married by the city clerk on July 24, 2011 — the same day that a state law took effect allowing same-sex couples to marry. That morning, Ms. Kopelov, then 85, and Ms. Siegel, 76, were the first couple through the door of the marriage bureau, on Worth Street in Lower Manhattan…From that day on, Ms. Siegel said, people would stop them on the street and congratulate them.” [Image via Flickr]

EASTERN EUROPE. Ukrainian nationalists (read: Neo-Nazis) promise bloodbath at Kiev Pride: “Our colleagues from the OUN movement have released a strong statement about the gay parade in Kiev. In short, on June 12, there will be a bloodbath in Kiev. The organizers of the march still have time not to hold the march.Today, we are forced to accept LGBT marches and festivals, and thus join the ranks of sinners and those who cover them. Who is going to be equated on this Sabbath?”

TOO HOT FOR TUESDAY. gaelc13.