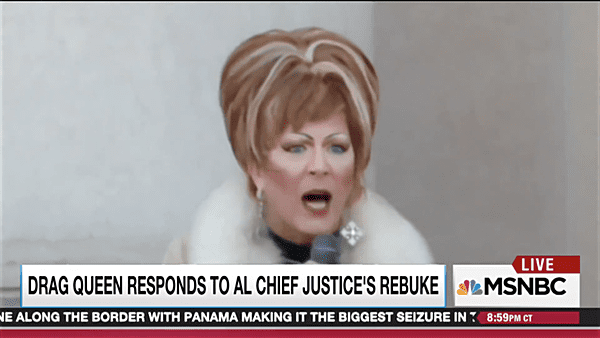 Ambrosia Starling, the Alabama drag queen who has been the worst nightmare for anti-LGBT state Supreme Court Chief Justice Roy Moore, may end up running against Moore in Alabama’s next gubernatorial race.

Starling, who goes by her drag name so as to protect her family, says she is seriously considering running for governor if Moore throws his hat in the ring for the 2018 race, as he is expected to do.

As we previously reported, Rachel Maddow is one of Starling’s many fans who suggested she would be well-suited for the state’s top job.

Moore was recently suspended from his post on the state Supreme Court because of his defiance of the U.S. Supreme Court’s ruling on gay marriage.

“When the idea was first thrown at me to run for office in the state of Alabama, at first I laughed,” Starling recalled. “And then I said, ‘Well wouldn’t that be something? That it finally takes a drag queen to straighten out the circus of politics’  If it takes a drag queen to get everyone to face the front, same direction, and listening, I’ll do that.”

In the meantime, Starling said that she will take on the fight in Alabama that has now turned to bathroom bills, with some legislators, like Rep. Will Ainsworth, attacking transgender students.

Earlier this week, Maddow also reported that Starling may run for governor, a prospect she declared to be “the best new thing in the world.”

Said Maddow of Starling’s potential run, “My dreams have come true.” As for what Starling’s platform would be, it’s simple: “Have good manners.”

Previous Post: « Seth Meyers Takes a Closer Look at the War Between Clinton and Sanders Supporters: WATCH
Next Post: Kim Davis: Gays Wanted to Shove Supreme Court Ruling Down My Throat and Make Me Eat It For Dinner – WATCH »