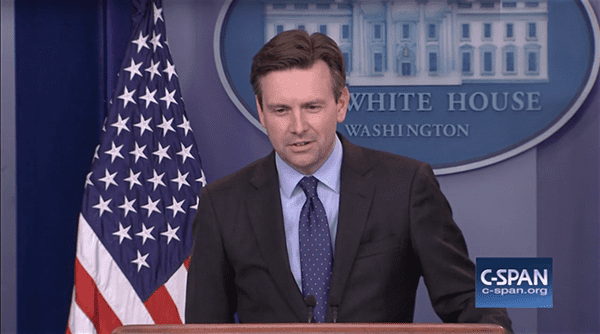 Patrick was responding to guidance that came from the Obama administration on how public schools should treat transgender students.

Of Patrick’s incendiary remarks, Earnest said, “This does underscore the risk of electing a right-wing radio host to a statewide elected office,” Earnest said.

“Let’s just walk through the facts here…This is guidance issued by the Department of Education and Department of Justice in response to request for information and guidance from school administrators across the country…This is not an enforcement action.”

Earnest claimed the White House issued the directive in response to requests from parents, teachers and students across the country. He said school administrators are more concerned about preventing “discrimination” against their students than partisan politics.

Earnest said the guidelines came from the Justice and Education departments — but conceded that President Obama was involved and consulted throughout the process.

And he said the timing was not related to North Carolina’s H.B.2, the so-called “bathroom bill” that preempts local ordinances on gay rights and requires people to use public restrooms that correspond to the sex as identified on their birth certificate.

Watch video of Earnest’s remarks, below.