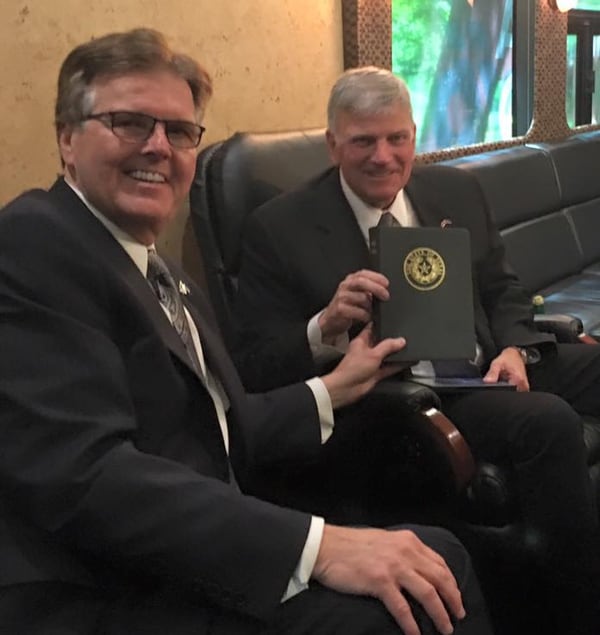 Texas Lt. Governor Dan Patrick says that the Lone Star state “will not yield to blackmail from the President of the United State” when it comes to transgender rights.

Patrick is referring to an ordered issued late Thursday from the Obama administration that says all public schools throughout the nation must allow transgender students to use the bathroom of their choice that matches their gender identity.

.@DanPatrick " we will not yield to blackmail by the President of the United States" @NBCDFW pic.twitter.com/JIaY6Manid

Texas Lt. Gov. Dan Patrick spoke to NBC 5 soon after the directive was first reported, saying, “This will be the beginning of the end of the public school system as we know it.”

Patrick compared the guidance from leaders at the departments of Education and Justice to a recent guideline from the Fort Worth school district superintendent meant to accommodate transgender students.

RELATED – Here is the Obama Administration’s Sweeping Transgender Guidance for Schools: READ IT

“Obama is turning bathrooms into courtroom issues,” Abbott told thousands of delegates at Dallas’ Kay Bailey Hutchison Convention Center. “I want you to know, I am working with the governor of North Carolina, and we are going to fight back.”

He added: “Our country is in crisis, and Texas must lead the way forward.”

Previous Post: « Rachel Maddow Tells Seth Meyers How She Thinks Hillary Can Beat Trump: WATCH
Next Post: Kansas Pastor Says He Was Stabbed Because He Is Gay: VIDEO »