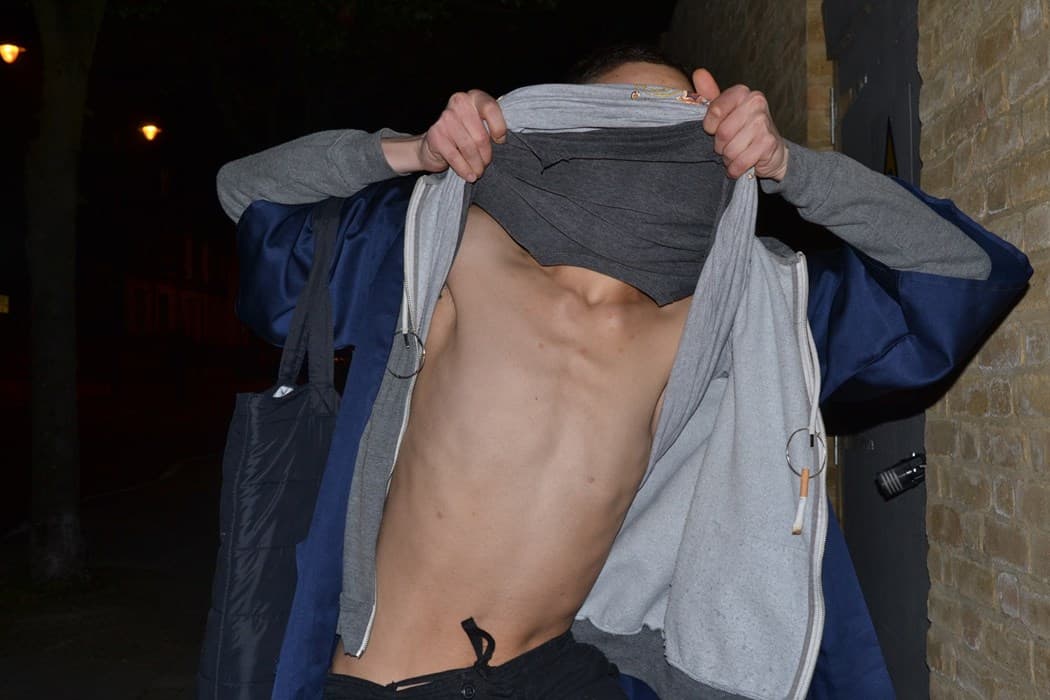 Karim Boumjimar (aka @beigetype), an 18-year-old Spanish-Moroccan London-based artist, claims he had his nipples and belly button surgically removed as an art piece about body modification.

His torso, which he flashed on social media and in a photo supplied to Dazed Digital, shows no scars, which Boumjimar claims is the result of “tonnes of make-up” and not just a PhotoShop session.

Boumjimar, who also appears in Zayn Malik’s video for “BeFoUr” says he was inspired by the Mona Lisa:

It’s really interesting how da Vinci meticulously paid attention to every single detail but chose not to give her eyebrows or the eyelashes. And then it came to me – I could do the same thing with my body. We are all born with the same anatomy, and we all have the basic human structure, I just think that it’s really interesting how we all absorb that and play with the idea of how our bodies should look, we are all given the same materials (our bodies) and decide whether we want to alter or modify what we are given.

Our bodies are our representations of how we are as humans. It’s like when you are in a lesson, and people start off with same objects but each one of them makes something different. They started off with the same object at the beginning but at the end, everyone has a different outcome, so as humans we all have the same anatomy and I decided to do what I want with mine.

He also cites an artist called Stelarc who attached a human ear to his arm.

Narcissism is my main medium. That’s what I have been doing and that’s what I’m going to do. I don’t think I have to include people in my life, I have a few friends I guess. My Instagram is just about me and that’s how I want it to be. It’s not so self-absorbed but at the same time, it is…Two days ago I was at home watching videos on YouTube and, somehow, ended watching a video of a girl who has three boobs. I’ve forgotten her name, but she’s pretty famous I think. She was talking about how she doesn’t need anyone’s validation and she knows she has three boobs. And that’s pretty much how I feel. I don’t have to prove anything to anyone because at the end of the day, it’s my body.