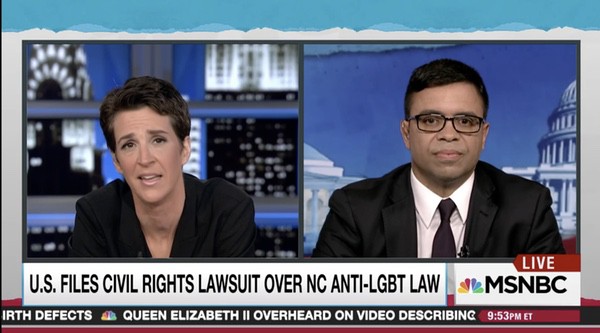 Debo Adegbile, who was President Obama’s nominee to lead the Civil Rights Division of the Justice Department, joined Rachel Maddow last night to talk about the work on civil rights during the Obama administration, and also about Attorney General Loretta Lynch’s knockout speech announcing the lawsuit against the state of North Carolina over HB 2.

“I wasn’t surprised that the Justice Department decided to sue North Carolina over this discriminatory law they’ve got, this LGBT discrimination law. I was surprised by the passion and the public comments, the forceful and moving public comments from the Attorney General when she announced that lawsuit…really putting a lot of passion and words for public consumption alongside that legal action. I wonder if you can tell me how you calculate something like that?”

“I think it’s very important as does the Attorney General and she spoke so eloquently and passionately and from the heart. The Attorney General and the people in the justice department – they have a couple of tools at their disposal, they have a few. Certainly they have policy statements and pronouncements, they have litigation, which is the primary tool that they use to advance the work of the Justice Department and the civil rights division, but they also have a platform and that platform needs to be used in the context of those other things to articulate the underlying values, and they are values that the Congress and that our nation has embraced over a period of time and after walking a very long and hard road so for the attorney general to come to that mic and express heartfelt values and to talk about the impact that discrimination can have for individuals, it is a moment that I think will be remembered, and that she will be remembered for.”