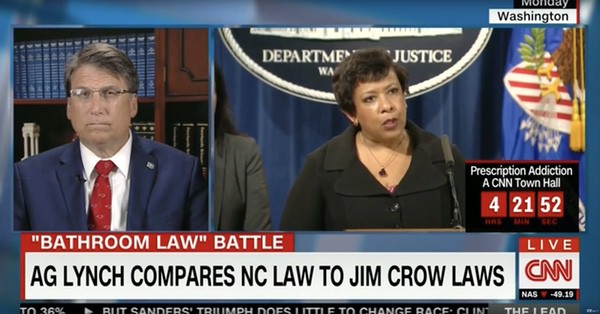 He wasn’t pleased, and chose to straighten Lynch’s argument out — because Lynch couldn’t possibly understand the comparison:

“It’s an insult, and it’s a political statement instead of a legal statement. It’s an insult toward our state and 10 million people that has no relevance to this issue regarding whether a gender identity individual or a boy can go into a girl’s restroom – to correlate that to civil rights marches in the ’50s and ’60s is totally irresponsible of our chief legal officer of the United States America.”

“To have the Justice Department come out with a massive interpretation of the Civil Rights Act for every employer in the United Staes now is something that I think needs clarification by the federal courts and frankly I think there’s a time where the Republicans and Democrats in Congress need to revisit the 1964 Civil Rights Act. These are complex issues and North Carolina for whatever reason politically has become the target by the Left on this agenda.”