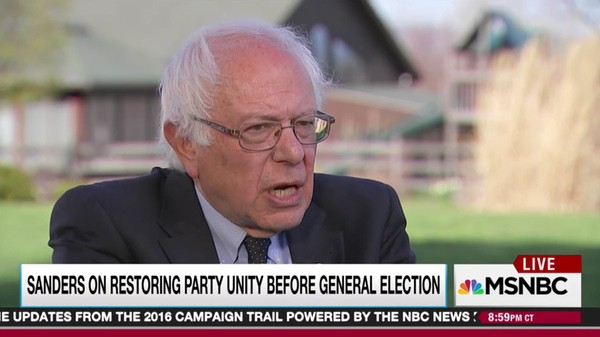 Bernie Sanders told Rachel Maddow on Friday that he disagrees with protesters trying to shut down rallies when asked about what happened yesterday at a rally in East Los Angeles, when Clinton was forced to shut down because of disruptions from Sanders supporters.

Maddow, then asked: “If they’re not disrupting inside, do you want your supporters protesting outside Hillary Clinton events?”

“I don’t mind. We have nothing to do with that. We have millions of supporters. If people want to protest outside, absolutely, that’s their right to do that.”

RELATED: Sanders Supporters Shut Down Clinton Rally in L.A. with Taunts: ‘She’s Not With Us’ – VIDEO

“We are not encouraging people to disrupt meetings – that we are certainly not doing…If people want to [stand outside] that is absolutely appropriate. Why not? That’s what freedom of speech is about. Freedom of dissent is about. People standing outside by the hundreds, by the thousands, saying ‘look, we disagree’. I think it’s exactly appropriate.”

Maddow then asked about the tone of some of the signage held by Sanders supporters and how it might hurt the party’s chances in November:

“When I see people standing outside a Hillary Clinton event, though, holding ‘Feel the Bern’ signs and then people next to them holding signs that say ‘Liar, Liar, Liar’ and ‘Hillary Clinton for Prison 2016′ — that is what leads to these concerns that you and Hillary Clinton, worthy as you each may be in each of your messages, won’t be pulling in the same direction for the same things in November.”

Sanders refused to address Maddow’s question about the tone of the protests but moved on:

“Let me just say this. Donald Trump represents a whole lot that I passionately hate, and if I’m not the candidate, I will do everything I can to make sure that Donald Trump does not become President…”