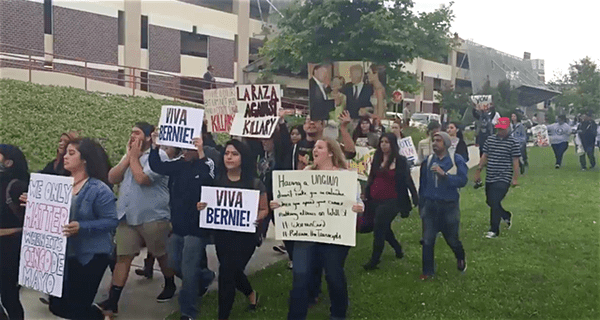 Supporters of Bernie Sanders reportedly forced a Hillary Clinton rally in East Los Angeles to come to an early close on Friday.

Protesters shouted “She’s not with us” at the event, denouncing Clinton for her positions on the minimum wage and illegal immigration. Some protesters indicated they would either write Sanders in on the general election ballot if Clinton is the Democratic nominee or not vote at all.

Protesters gathered Thursday in the streets and on the campus of East Los Angeles College in Monterey Park, where former Secretary of State Hillary Clinton brought her campaign for the Democratic presidential nomination.

Supporters of Clinton’s Democratic rival, Bernie Sanders, confronted Clinton’s backers outside the college as a cordon of police kept watch.

“She would do absolutely nothing to help the middle class,” said Cilena Aziz, a Sanders supporter.

“I believe that being a Democrat is for the people,” said Regina Cruz, a Sanders supporter. “I have a really difficult time believing that she is really for the people.”

Watch a video of protesters as well as a news report from NBC 4, below.

Previous Post: « ‘Advice and Consent’ Means the Senate Must Vote on Merrick Garland
Next Post: Kristin Chenoweth and Idina Menzel Have a ‘Wicked’ Reunion: WATCH »