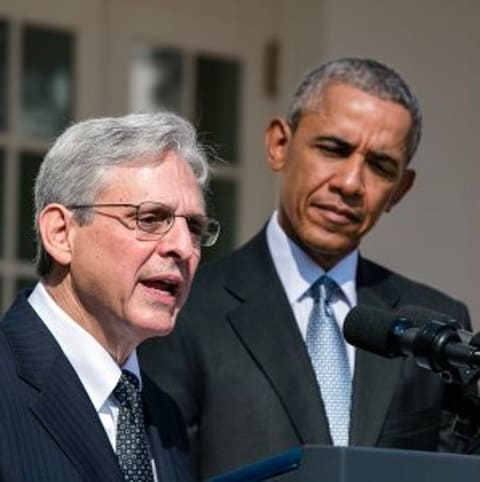 Despite meetings with several Republican senators, despite two of them demanding hearings, and despite his unimpeachable credentials to sit on the Supreme Court, Merrick Garland seems no closer to getting Senate Republicans to move his nomination through the Judiciary Committee.

Mitch McConnell and his conference appear hell bent on obstructing President Obama once again, forgetting that a presidency is 8 years, not 7, and that their job is to provide “advice and consent” on presidential nominees.

Given this unjustified obstruction, a quixotic idea is starting to gain steam: President Obama does not have to wait for the Senate to act on Judge Garland’s nomination. If the Senate does not vote “yes” or “no,” its silence can be interpreted as “consent” and Judge Garland can become Justice Garland anyhow.

Although this may get us to the result we want — a progressive majority on the Supreme Court for the first time in 40 years — it would set a terrible precedent. I’m not talking about the erosion of separation of powers; I am unsympathetic for a Congress that has abdicated its legislative responsibilities and forced President Obama’s hand. Rather, interpreting the words “advice and consent of the Senate” in this way would elevate a literal, textualist interpretation of the Constitution, the same kind of interpretation the late Justice Antonin Scalia used so effectively to tread on the rights of marginalized populations.

Article II, Section 2, clause 2 of the Constitution, otherwise known as the Appointments Clause, reads, in relevant part: The President “shall nominate, and by and with the Advice and Consent of the Senate, shall appoint Ambassadors, other public Ministers and Councils, Judges of the Supreme Court, and all other Officers of the United States, whose Appointments are not herein otherwise provided for, and which shall be established by Law …”

The President’s job is to “nominate” and “appoint.” The Senate’s job is “advice and consent.” Normally, when the Senate holds hearings and a vote, it can say yes or no to the President’s nominee. Since 1789, the Senate has done both. But the clause says nothing about a “vote.” The Constitution does not require the Senate’s “advice and consent” to come in the form of hearings and a vote. So, when the Senate declines to hold a vote, its silence can either be interpreted as implied consent, as is common in other areas of law, or as a waiver of its duty.

This is a dangerous argument. As much as we might want to see Judge Garland on the Supreme Court, President Obama should wait for a recalcitrant Senate to come around or for a new Senate to start its session. The ensuing constitutional battle — the appointment would be challenged in federal court — would damage the President’s (and the Democratic nominee’s) reputation and distract the country from the real issues at hand.

More importantly, it would elevate a “textual” interpretation of the Constitution over real-life considerations. Words, though important, should not be our only recourse. I also don’t particularly care to rely exclusively on what the Framers intended when they wrote “advice and consent”.

In today’s understanding of democracy — one-person, one-vote, direct election of senators, participatory primaries to select party nominees — keeping the Senate out of the process is illiberal and contrary to democratic values, however much the Senate suffers from capture by archconservatives and the monied Republican elite.

Previous Post: « Gendry From ‘Game of Thrones’ Is in a Gay Relationship with Rob Green in New Music Video – WATCH
Next Post: Sanders Supporters Shut Down Clinton Rally in L.A. with Taunts: ‘She’s Not With Us’ – VIDEO »