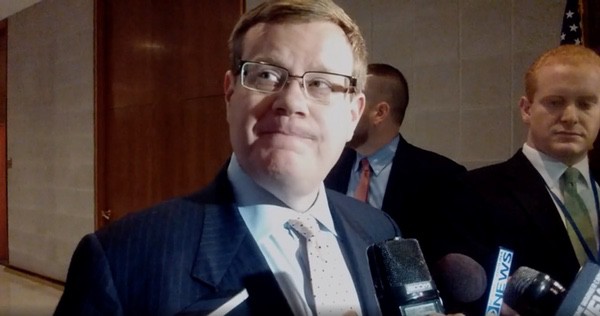 North Carolina House Speaker Tim Moore told reporters on Thursday afternoon that they “will take no action by Monday” to comply with an order from the U.S. Justice Department that they stop enforcing anti-LGBT HB 2, which the DOJ said violates Title IX of the civil rights act by discriminating against transgender individuals.

Moore appeared defiant in his discussion with the press:

“That deadline will come and go. Obviously, we don’t ever want to lose any money, but we’re not going to get bullied by the Obama administration to take action prior to Monday’s date. That’s not how this works.”

“A claim by the Obama administration charges that one part of House Bill 2, which requires state employees in public government buildings and students in our universities to use a restroom, locker room and shower facility that match their biological sex, is now in violation of federal law. The Obama administration has not only staked out its position for North Carolina, but for all states, universities and most employers in the U.S.

“The right and expectation of privacy in one of the most private areas of our personal lives is now in jeopardy. We will be reviewing to determine the next steps.”

In an interview with the North Carolina Chamber of Commerce, McCrory called the order an “overreach” by the Obama administration.

When asked if it will end up in the courts, McCrory says “I don’t know.”

McCrory also continued to submit the fantastical allegation that HB 2 was started by “the Left” and is a coordinated plot by the Human Rights Campaign and Democrats to vote him out of office. He also suggested that the Title IX rules were a sneak attack on him and were snuck into contracts that he had already signed.