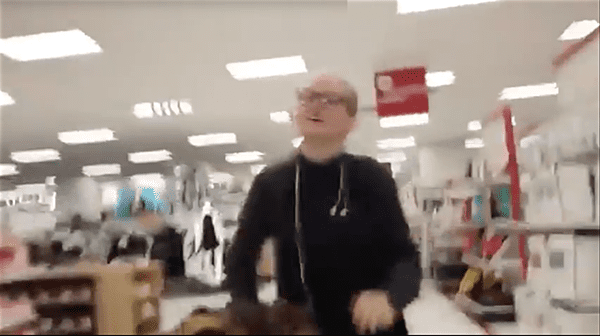 A transgender customer at a Target store confronted a rabid Christian protestor who was recording himself shouting anti-LGBT epithets because of Target’s LGBT-inclusive bathroom policy.

In a video of the confrontation, the protester can be heard shouting, “Do not come to Target! They let transgender people in the bathroom.” That incensed the transgender customer who happened to be nearby.

“Yeah and you know what, there’s a transgender person right here so you can just keep on walking,” the shopper retorted back.

The protester tried to shout down the customer, exclaiming, “That’s okay, you’re going to go to hell.”

RELATED: Bible-Bearing Christian Mom Goes on Anti-LGBT Tirade at Target: ‘Are You Gonna Let the Devil Rape Your Children?’ – WATCH

The shopper wouldn’t let the homophobe off the hook, however, fighting back with, “And you’re going to be an a**hole for the rest of your life.” The customer also denounced the bigot’s complete misunderstanding of what it means to be transgender: “Trans men aren’t women, a**hole.”

The protester also attacked homosexuals whom he conflated with transgender people. He said, “Homosexuality is not okay with God…Homosexuals are only 2% of the world’s population, but they take up 90% of the HIV. Some safe lifestyle that is, right?”

Perpetuating the lies about so-called bathroom predators that have been enabled by Target’s new policy, the man said, “Kids have been having their pictures taken in Target bathrooms by pedophiles because Target makes it okay for grown men to put on a dress and go in the same bathroom as your daughter.”

While being escorted out by police he added, “Jesus Christ was not friends with any homos. I’m sorry to tell you guys that.”