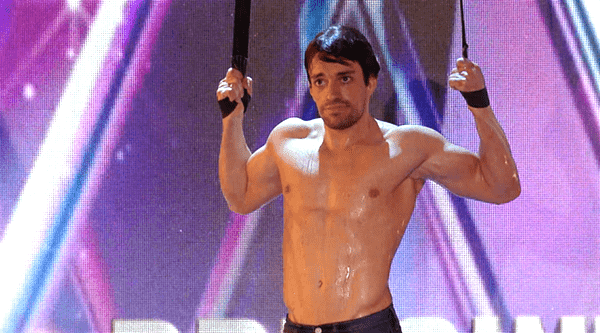 Britain’s Got Talent got wet and wild recently with a performance by a shirtless acrobatic contestant.

Charlie Placais treated guests to a peep show of what he looks like taking a bath before ascending from that bath into the sky above the stage to perform several acrobatic feats.

While Placais got 4 yeses from the judges on the show, the broadcast has been panned by some LGBT viewers in the UK. At the heart of the discontent is a bit done by judge David Walliams (but instigated by fellow judge Simon Cowell) in which Walliams plays at being gay even though he is not.

Cowell cut off Walliams from commenting on Placais’ performance during the judges’ critique, with the implied understanding being that Walliams of course enjoyed the performance. Not content with being silenced however, Walliams ran after the wet and shirtless acrobat to give him a hug backstage before being pulled off of him by the show’s hosts, Ant and Dec. They shouted at Placais, “Run, Charlie, run!”

The judge, who was married to model Lara Stone for five years, jokingly ran after a seriously sexy half-naked acrobat on tonight’s show.

While he was hoping to make viewers laugh with the gag, he received a backlash on Twitter for allegedly offending the gay community. […]

When the contestant walked off stage after dazzling the audience with his tanned chiseled torso, the judge jokingly ran after him.

One of the comments on social media read: “The lecherous predatory sleazebag act David Walliams does is unfunny, repugnant, insulting. It’s defamatory & a bad impression for gay youth.”

Watch the performance and the ‘skit’ that ensued, below.