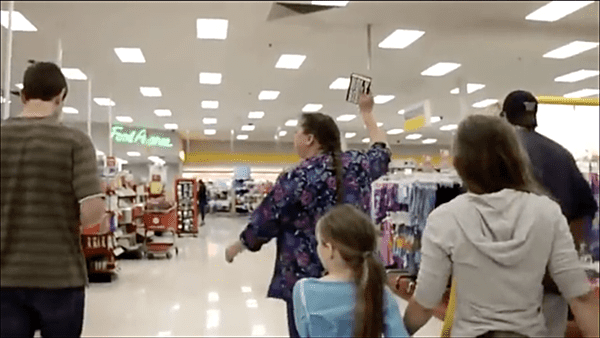 A bible-waving Christian mom took her family into Target on Mother’s Day to protest the company’s trans-inclusive bathroom policy which allows customers to use bathrooms in accordance with their gender identity.

Video of the incident shows the woman leading a cortege of her kin through an as-yet unspecified Target store, denouncing the wickedness of Target’s new policy, blasting perverted and predatory men who go into women’s bathrooms, and decrying the homosexual agenda.

“Attention Target customers,” she yelled. “Do not be deceived, Target would have you believe with their Mother’s Day displays that they love mothers and children. This is a deception. This is not love, and they’ve proven it by opening their bathrooms to perverted men. I’m a mother of 12 and I’m very disgusted by this wicked practice.” […]

The woman warned people against “bowing to the homosexual perverted agenda.” At the end of the video, Target employees can be seen escorting the mother and her brood out of the store. While you can’t hear what they say, one Target employee seems to be relishing in the absurdity of these bigots.

As they exit, a man who appears to be the woman’s husband shouts back into the store, “The destruction of God is coming on this nation….AND Target!”

Of course, this isn’t the first time that Bible-bearing anti-LGBT Christians have decided to wave the Bible around in Target stores to protest the retailer’s new policy.

Other videos of protests have also emerged, including one of an actual man dressed as a woman going into a Target bathroom to make a point about “crazy guys who will dress up like me to spy on you while you go to the bathroom.” Never mind that he and other anti-LGBT ‘Christians’ seem to be the only ones doing this.

A third video that appears to have been recorded on Mother’s Day shows a man targeting 3 different Target stores for his bigoted ‘protest.’ At one of the stores he shouts, “Target hates you and your children. A bunch of pedophiles and perverts.” At a different store, he says he was confronted by a “tranny” who he called “a walking identity crisis.”