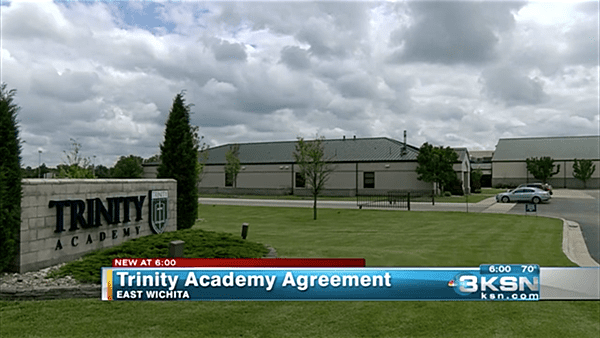 Trinity Academy, a Christian prep school in Wichita, Kansas, has come under fire over a “statement of understanding” it sends to potential applicants in which it makes clear the school can expel students who come from homes that ‘promote’ the “LGBT lifestyle.”

That statement was broadly interpreted to mean that a student could be expelled from Trinity simply for having a sibling who identifies as lesbian, gay, bisexual or transgender.

Given the debate and confusion in our society about marriage and human sexuality it is vital that Trinity families agree with and support the school’s traditional, Christian understanding of those issues. Therefore, when the atmosphere or conduct within a particular home is counter to the school’s understanding of a biblical lifestyle, including the practice or promotion of the LGBT (lesbian, gay, bisexual, transgender) lifestyle or alternative gender identity, the school should have the right, in its sole discretion, to deny the admission of an applicant or discontinue enrollment of a current student.” 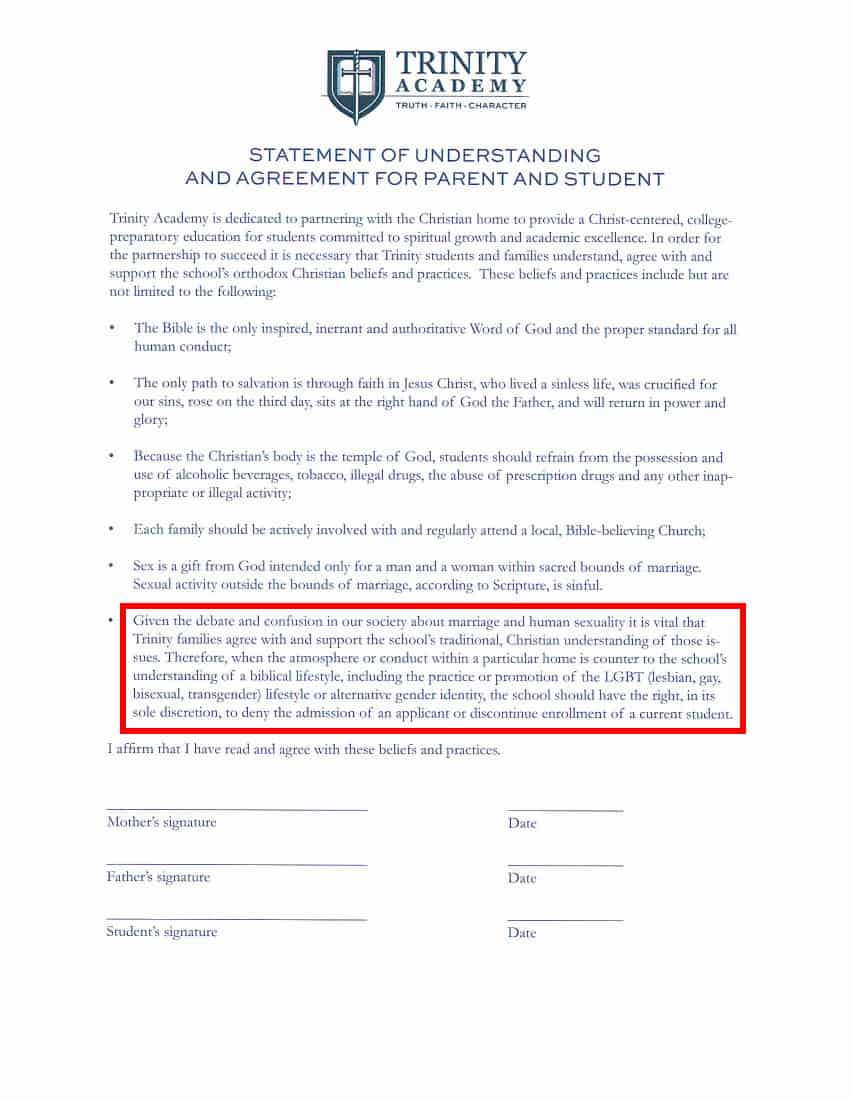 Now, Trinity has attempted to walk back its remarks, saying it hasn’t expelled any student for having an LGBT sibling or for themselves identifying as LGBT. KSN.com reports:

Trinity says the application process is designed to make sure new families know who they are and what they believe. The school goes on to say they hold biblical views on human sexuality and gay marriage and that they want prospective families to understand that.

Here is the full statement from Trinity in response to the controversy:

The foundation of Trinity Academy’s success is that we are dedicated to partnering with our families for the education of their students. Because of this dedication, our entire application process is designed to make sure new families know who we are and what we believe. Trinity Academy holds biblical views on human sexuality and gay marriage and we want prospective families to understand that. We feel that this is only fair given the disagreement and discord in our society over such issues. It is then up to the family as to whether they feel they can partner with Trinity and support these biblical Christian views.

Again, Trinity’s whole intent is to make sure families know what we believe so we can partner together successfully for the good of the students.

The alumni who leaked Trinity’s “statement of understanding” have since identified themselves and said they hope to provide encouragement and support to current and prospective LGBT students at Trinity. The Advocate reports:

Morgan Douglas Faulkner, a 2013 graduate of the school in question, Trinity Academy, and former senior class president, admitted to being among a group of alumni responsible for leaking the institution’s so-called Statement of Understanding. […]

“We leaked this document in order to raise awareness about Trinity’s policies to prospective students and parents who are on the fence about sending their children to Trinity for their academics, and ultimately for the greater good,” Faulkner wrote.

Faulkner also blasted the school’s response to the statement being leaked, saying it “explicity contradicts the legalise within their statement of understanding” and the school’s motto, “Truth. Character. Faith.”

“It is crucial that each and every one of you know that you are not alone in your struggle. Even after leaving or graduating, it can be very difficult to accept yourself for who you truly are. We want to help you find the peace that may be eluding you, and we have created a hashtag (#TrinityInsurgency) to raise awareness about these issues. Not just for Trinity students and alumni, but for individuals all over the country and the globe who find themselves in a similar position.”

Watch a news report on Trinity Academy’s anti-LGBT stance, below.

Previous Post: « John Oliver and the Leader of Chechnya Have a Catfight: WATCH
Next Post: 10 States Join Texas Lawsuit Against Obama Administration Over Transgender Students – VIDEO »