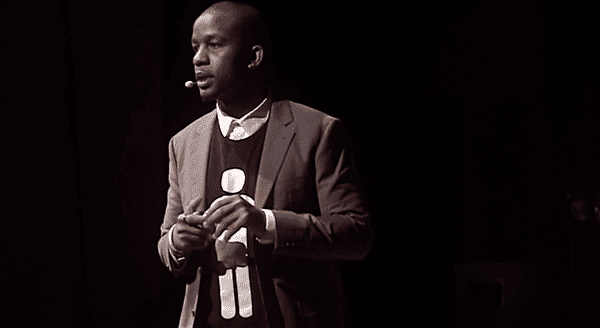 Out gay former NFL player and current executive director of the You Can Play Project Wade Davis recently gave a TEDx Talk in which he delved into what he calls “the mask of masculinity” and how he battled internalized homophobia for years before and after coming out of the closet.

Speaking in March at the University of Florida’s TEDx conference, Davis began by discussing a game he used to play as a little boy with his friends, ‘Smear the Queer.’ Davis explained that while neither he nor his friends knew what queer meant, they all knew that they “did not want to be the queer.”

Davis added, “We raise young boys to wear a mask of toughness in order to be a man, and we rob them of their childhood and their innocence. And sport is one of the many vehicles parents choose to help them put on this mask. And as little boys we learn that being labeled ‘tough’ grants you a crtian type of social capital and being thought of as weak or queer is suicidal, both athletically and socially.” And yet a more beneficial education was lacking in his life, as it is for many young boys. “I was never taught how to be myself or love myself,” Davis explains.

As a football player, Davis learned about a concept known as “wasted motion”, a notion that is pretty much exactly what it sounds like–extra motion (on the football field in this case) that requires energy and effort yet yields zero beneficial result. Davis began to realize that hiding his sexuality and performing a rigid version of masculinity was nothing but wasted motion. “‘I’m standing gay. I’m walking gay. I’m running gay. Would you just stop being so gay?!'” he recalls thinking. “That was wasted motion. Most of my life in fact was wasted motion.”

PREVIOUSLY – Out Former Football Player Wade Davis Opens Up About Being Gay In The NFL: VIDEO

Davis says he faced a complete paradigm shift by coming out: “I would be giving up so much power by being gay. And I’d be violating the very essence that I was taught of what being a man was.”

But Davis came to learn one important lesson: while holding on to his mask of masculinity might bring him many things, it would never bring him freedom.

Previous Post: « Paul Ryan and Donald Trump Release Joint Statement After Meeting: VIDEO
Next Post: WATCH: Trailer for ‘Tickled’, Doc on Tickling Culture That Has a Homoerotic and Dark Twist »