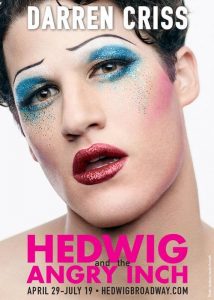 THEATRE. Darren Criss returns to Hedwig and the Angry Inch in national tour.

MOVIES. Tom Hanks is back as Robert Langdon in first trailer for Dan Brown thriller Inferno.

MALE MODEL MONDAY. Brought to you by Jason Koko.

THIS IS ACTING. Emma Thompson doesn’t care for actors who get work based on how many Twitter followers they have.

FACEBOOK. Former employees say the social network regularly suppressed conservative news: “Several former Facebook “news curators,” as they were known internally, also told Gizmodo that they were instructed to artificially ‘inject’ selected stories into the trending news module, even if they weren’t popular enough to warrant inclusion—or in some cases weren’t trending at all. The former curators, all of whom worked as contractors, also said they were directed not to include news about Facebook itself in the trending module.”

BE ALL THAT YOU CAN BE. Eric Fanning jokes about his stalled confirmation as first openly gay Secretary of the Army while at an LGBT military gala: “Fanning asked Edith Windsor, the New York widow who successfully challenged the Defense of Marriage Act before the U.S. Supreme Court in 2013, to become his “confirmation campaign manager” after he took the stage at the Hyatt Regency Washington.”

MARS. NASA detects “atomic oxygen” on the red planet for the first time in roughly 40 years: “NASA scientists say they found less oxygen than anticipated — roughly half what they expected. Fluctuations in the Martian atmosphere may explain the low readings.”

She looks like a gay dude wearing makeup pic.twitter.com/bATG9baS4O

Wait….is this supposed to be an insult cause they slay sooooooo….. https://t.co/bIRIp7o6k9

TEXAS. Former GOP candidate for state representative candidate calls trans people ‘Delusional,’ compares them to anorexics, and opines for the days when they could be stoned.

TERROR. Another man has been thrown off a roof by ISIS for allegedly being gay: “Local activists confirmed that the man was arrested by the group’s Hisba police on charges of homosexuality and was barbarically thrown from the top of a building in central Manbij.”

LABELS OR LOVE. Kristen Stewart refuses to define her sexuality: “Me not defining it right now is the whole basis of what I’m about. If you don’t get it, I don’t have time for you.”

NORTH CAROLINA. Kristin Chenoweth to perform in the Tar Heel State but will donate all proceeds from concert to charity: “I’m going to talk about the kids in the audience, directly to them, who are gay or feel different.”

Previous Post: « What To Watch On TV This Week: Oakley Finished ‘The Amazing Race’
Next Post: Arkansas Judge Who Traded Reduced Sentences for Sex with Young, Male Defendants Resigns »