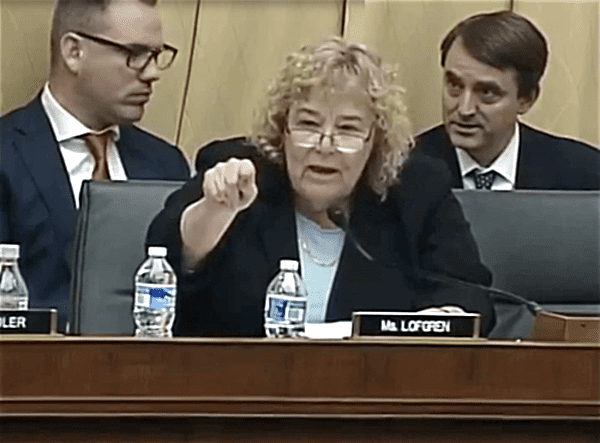 The witness, Gail Heriot, a member of the United States Commission on Human Rights, was brought before the House Judiciary Committee to testify against President Obama’s guidance on transgender students. Lofgren first spoke up to denounce Heriot’s testimony on transgender people as “regrettable.”

As Talking Points Memo notes, Lofgren read Heriot’s written testimony aloud for the committee. Wrote Heriot, “If I believe that I am a Russian princess, that doesn’t make me a Russian princess, even if my friends and acquaintances are willing to indulge my fantasy. Nor am I a Great Horned Owl just because — as I have been told — I happen to share some personality traits with those feathered creatures.”

Responding to that testimony, Lofgren said, “I’ve got to say, I found this rather offensive. And it says to me that the witness really doesn’t know anything and probably has never met a transgender child who is going through, in almost every case, a very difficult experience finding themselves.” She added, “it’s very regrettable that that comment was put into the record, and I think it’s highly offensive.”

When Heriot tried to pipe in and defend her statement, Lofgren wasn’t having it. “I think you’re a bigot, lady. I think you are an ignorant bigot,” Lofgren said.

Anti-LGBT Republican Rep. Steve King (IA) quickly chimed in to tell Lofgren that she was “out of order.” “We don’t call names in this committee,” King added.

Lofgren stood up to King, saying, “Mr. Chairman, it is my time, and I would just like to say that we allow witnesses to say offensive things, but I cannot allow that kind of bigotry to go into the record unchallenged.”

Lofgren posted video of the exchange on Twitter, writing, “I don’t usually confront committee witnesses, but bigotry and hate need to be exposed for what they are.”