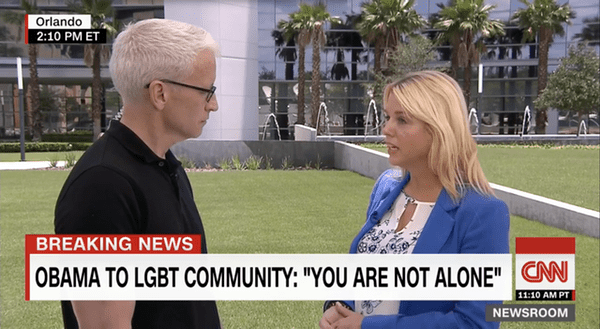 On Tuesday, Anderson Cooper took Florida Attorney General Pam Bondi to task for her about-face on LGBT rights in the wake of the Orlando shooting massacre.

Bondi famously fought tooth and nail against gay marriage in the Sunshine State. Now, Bondi has signaled her support for the LGBT community following the the attack on gay nightclub Pulse in Orlando. Said Bondi on Sunday, “Anyone who attacks our LGBT community, anyone who attacks anyone in our state, will be gone after to the fullest extent of the law.”

Cooper noted that those remarks didn’t sit right with a lot of LGBT people in the state, who have known Bondi has a civil rights foe.

“I talked to a lot of gay and lesbian people here yesterday who are not fans of yours and who said that they thought you were being a hypocrite, that you for years have fought — you basically gone after gay people, said that in court that gay people simply by fighting for marriage equality were trying to do harm to the people of Florida. To induce public harm, I believe was the term you used in court. Do you really think you’re a champion of the gay community?”

Bondi responded by saying that she was merely defending the state constitution. She added, “I’ve never said I don’t like gay people, that’s ridiculous.”

Cooper tried to get Bondi to acknowledge the specific arguments she and her lawyers used to fight same-sex marriage — again, that affording LGBT people marriage equality would “impose significant public harm” on the state — but Bondi refused to take accountability for using that line of reasoning. “Anderson, I don’t believe gay people could do harm to the state of Florida,” she said.

Cooper noted what he called the “sick irony” of the fact that spouses of the LGBT victims in Sunday’s shooting would not be legally entitled to obtain updates or survivor benefits if Bondi had gotten her way and blocked gay marriage in Florida.

“The hotline that you’ve been talking about on television which allows family members and spouses of the dead to get information, which is incredibly important, and I appreciate you talking about it on the air, had there been no gay marriage, had there been no same-sex marriage, you do realize that spouses, there would be no spouses, that boyfriends and girlfriends of the dead would not be able to get information and would not be able probably even to visit in the hospital here. Isn’t there a sick irony in that?”

Bondi continued to pivot away from her past opposition to gay marriage, but Cooper wouldn’t let her off the hook. He pointed out that he couldn’t find a history of Bondi making any remarks about the LGBT community prior to the Orlando massacre that were not hurtful or derogatory:

“It’s just that — I will say I have never really seen you talk about gays and lesbians and transgender people in a positive way until now. I read your Twitter history for the last year, and I saw you tweeting about, you know, national dog month and national shelter dog appreciation day or adopt a shelter dog month. It is gay pride month. You’ve never even tweeted about gay pride month.”

Bondi replied by saying she had posted a picture of rainbow-colored hands intertwined together on her website after the shooting.

Cooper concluded by saying, “I know a lot of gay and lesbian people in the state want to feel that the people that represent them, represent everybody in the state.” To which Bondi could only reply, “We’re human beings and that’s what this is about.”

Watch video, via Media Matters For America, below.

UPDATE 4:47 PM EST: As noted above, Bondi says that her website now features an image of rainbow-colored hands embracing. According to Politico’s Marc Caputo, it doesn’t.

Pam Bondi says her website has 'rainbow-hands people' in re: Orlando shooting. But it doesnt https://t.co/vztc0SARW5 pic.twitter.com/VtPICco03I