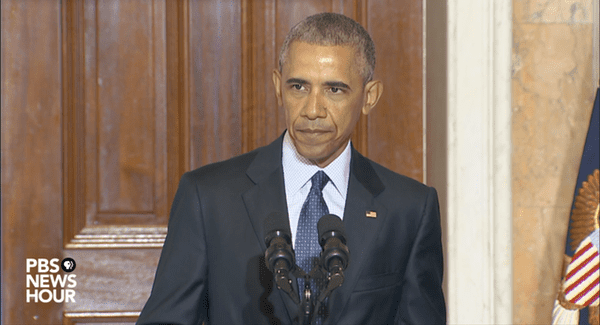 President Obama on Tuesday denounced Donald Trump’s proposed ‘Muslim ban’ and excoriated those who criticize him for not using the term ‘radical Islam.’

The speech was far-ranging and covered the Orlando shooting, the war against ISIL, gun control, and Donald Trump.

“…here at home, if we really want to help law enforcement protect Americans from home-grown extremists, the kind of tragedies that occurred at San Bernardino and that now have occurred in Orlando, there is a meaningful way to do that. We have to make it harder for people who want to kill Americans to get their hands on weapons of war that let them kill dozens of innocents. […]

It is absolutely true, we cannot prevent every tragedy. But we know that consistent with the Second Amendment, there are common sense steps that could reduce gun violence and could reduce the lethality of somebody who intends to do other people harm. We should give ATF the resources they need to enforce the gun laws that we already have.”

Obama also called for a reinstatement of the assault weapons ban to “make it harder for terrorists to use these weapons to kill us.”

Obama then turned to discussing how Republicans often get flummoxed because he doesn’t use the term “radical Islam.” Obama said, “That’s the key, they tell us. We cannot beat ISIL unless we call them radical Islamists.” And then the Professor-in-Chief signaled that school was in session.

The answer is none of the above. Calling a threat by a different name does not make it go away. This is a political distraction.

Since before I was president, I have been clear about how extremist groups have perverted Islam to justify terrorism. As president, I have called on our Muslim friends and allies at home and around the world to work with us to reject this twisted interpretation of one of the world’s great religions.”

The president then took on a more sarcastic tone, quipping, “Not once has an adviser of mine said, ‘Man, if we use that phrase, we are going to turn this whole thing around,’ not once.” He wondered whether “someone [read: Trump] seriously thinks that we don’t know who we are fighting?”

Obama added, “there is no magic to the phrase ‘radical Islam.’ It is a political talking point. It is not a strategy.”

Obama said, “If we fall into the trap of painting all Muslims as a broad brush, and imply that we are at war with the entire religion, then we are doing the terrorists’ work for them.”

Obama then took on Trump’s call for a ban on Muslims entering the United States, saying,

We heard these suggestions during the course of this campaign. Do Republican officials actually agree with this?”