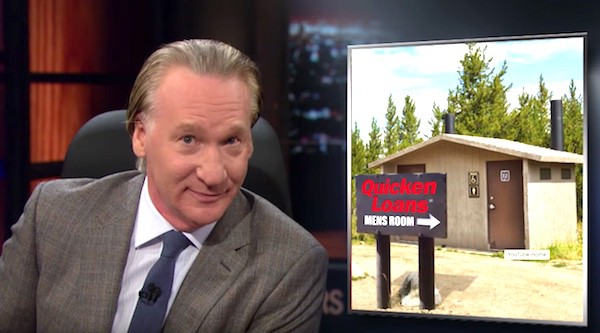 Last night, Bill Maher’s “New Rule” was about how capitalism is taking over everything, and how it differs from socialism.

“Older Americans are more religious.And America’s real religion is capitalism. And like any religion, it needs a devil. And that devil has always been socialism. In 1961 Ronald Reagan said if we passed Medicare we’d wind up telling our children what it was once like in America, when men were free. Thanks, Nostradumbass!”

More recently, the U.S. government announced that it would begin selling naming rights to our national parks because the parks are 11 billion dollars in debt.

“So get ready to see the Bison roaming at Yellowstone with the Nike swoosh shaved into their ass. And you’ll no longer be having anonymous gay sex in Yosemite’s rest area #12. You’ll be getting blown in the Quicken Loans Men’s Room. The Grand Tetons will be brought to you by Hooters and the Washington Monument by Cialis. And the Statue of Liberty by Massengill. ‘Give me your tired, your hungry, your feeling not so fresh.'”

Previous Post: « Texas Democrat Fights Back Against GOP Leaders’ Anti-Trans Bigotry, Proposes Statewide LGBT Protections
Next Post: It Got Better for Raven-Symoné. ‘The View’ Host Opens Up about Coming Out: WATCH »