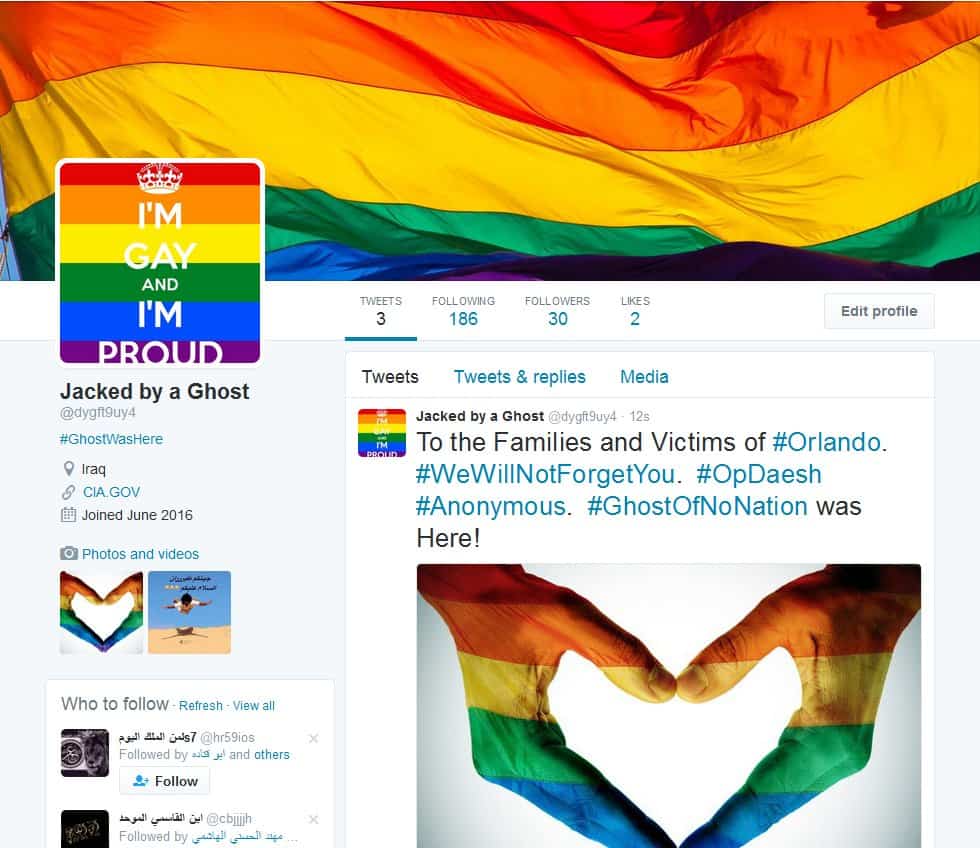 Hacktivist members of the group Anonymous have taken over several pro-ISIS Twitter accounts and filled them with images of gay pride following the Orlando massacre.

The Orlando shooter reportedly swore allegiance to ISIS in a phone call to 911 during his attack on the gay nightclub, Pulse.

ISIS has a history of brutally killing people it claims are gay.

Following the shooting at a gay nightclub in Orlando — which the FBI is investigating as both a hate crime and an ISIS-inspired terror attack — the Anonymous hacker started to infiltrate pro-ISIS accounts and then post images of rainbow flags, non-graphic gay pornography and slogans such as “I’m gay and I’m proud.”

The pro-ISIS accounts that were hacked were all renamed “Jacked by a Ghost” and most linked to CIA.gov. While some of the hacked accounts have been suspended, some still exist, according to CBS San Francisco.

As of Wednesday afternoon, the Anonymous hacker Twitter account appeared to still be at it, tweeting its successful takeover of the Twitter account @islamsunna111, with an IP address in Oman, and peppering that account with slogans such as “Make love, not war” and “#MoreSex #LessDeath #ISIS #ISIL #IslamicState.”

Hacker WauchulaGhost is behind most of the attacks.

For instance, he broke into ISIS account, @gi_h_a_d35, changed his profile picture to a gay flag and tweeted out this message:

WauchulaGhost has also been tweeting out their IP addresses, phone numbers and other contact information for fellow hackers to use.

I did it for the lives lost in Orlando.

Daesh [ISIS] have been spreading and praising the attack, so I thought I would defend those that were lost. The taking of innocent lives will not be tolerated.

Our actions are directed at Jihadist extremists. Many of our own [group of hackers] are Muslim and we respect all religions that do not take innocent lives.

Check out some tweets by WauchulaGhost, below.

Also, this image from 2015 has been recirculating as well.