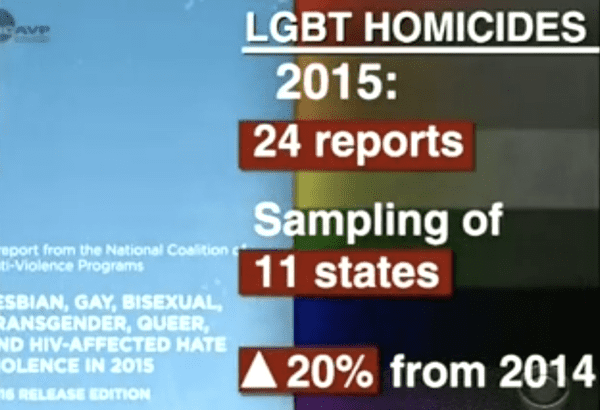 CBS’ Evening News on Tuesday took a look at the uptick in anti-LGBT violence in the U.S. following the Orlando massacre at gay nightclub Pulse.

Host Scott Pelley began the segment by pointing out the painful juxtaposition the LGBT community now faces in 2016 — on one hand, LGBT people in the U.S. have never been afforded more civil rights; on the other, hatred is still a daily part of our lives. Said Pelley, “There has been so much progress for the LGBT Community, but we are now reminded that fear is still a constant reality.”

Mireya Villarreal pointed out the troubling statistics: “In 2015 there were 24 reports of gay and transgender homicides in a sampling of 11 states. That’s a 20 percent increase from 2014. Lorri Jean is the CEO Of the LGBT Center in Los Angeles.”

Said Los Angeles LGBT Center CEO Lorri Jean, “The politicians who slander LGBT people, who say that we should be driven out of public life, that we’re not fit to raise children, that we are a threat to the moral fabric of our society — that kind of rhetoric promotes the kind of violence that happened yesterday.”

Watch CBS’ segment, via Media Matters For America, below.