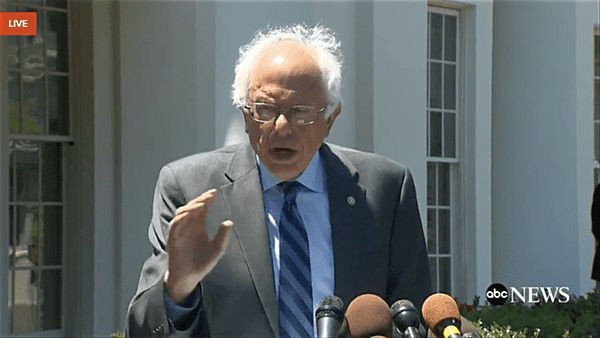 Senator Bernie Sanders spoke with the press after meeting with President Obama at the White House on Thursday, saying he would do whatever he can to work with Hillary Clinton to defeat Donald Trump in November.

He vowed to continue campaigning ahead of the DC primary on Tuesday and said he will take his platform ideas to the convention, but seemed to suggest he will not contest the actual nomination.

“I look forward to meeting with her in the near future to see how we can work together to defeat Donald Trump,” he said after the meeting.

While Sanders vowed to compete in next week’s primary, he promised to carry only his platform to the Democratic convention this summer.

“These are some of the issues that many millions of Americans have supported during my campaign,” Sanders said. “These are the issues that we’ll take to the Democratic national convention in Philadelphia at the end of July.”

Sanders also thanked Obama and Vice President Biden for not putting their “thumb on the scales” during the Democratic primary, though offered no review of his hour-and-a-half-long meeting with Obama.

You can read Sanders’ full remarks, via TIME, below:

Thank you all. Let me begin by thanking President Obama and thanking Vice President Biden for the degree of the impartiality they established during the course of this entire process.

What they said at the beginning is that they would not put their thumbs on the scale, and in fact, they kept their word, and I appreciate that very, very much.

Our campaign has been about building a movement, which brings working people and young people in to the political process to create a government which represents all of us and not just a handful of wealthy campaign contributors. We will continue doing everything that we can to oppose the drift which currently exists toward an oligarchic form of society, where a handful of billionaires exercise enormous power over our political, economic and media life.

This is the wealthiest nation in the history of the world. We should not be having millions of senior citizens and disabled veterans struggling to put food on the table, because of inadequate Social Security benefits.

We should not have the highest rate of childhood poverty of almost any major country on Earth. We should not be having Americans in inner cities, in rural communities, on Native American reservations who have life expectancies lower than many people in Third World countries.

These are some of the issues that many millions of Americans have supported during my campaign. These are the issues that we will take to the Democratic national convention in Philadelphia at the end of July.

Donald Trump would clearly, to my mind and I think the majority of Americans, be a disaster as president of the United States. It is unbelievable to me, and I say this with all sincerity, that the Republican Party would have a candidate for president, who in the year 2016 makes bigotry and discrimination the cornerstone of his campaign.

In my view, the American people will not vote for or tolerate a candidate who insults Mexicans and Latinos, who insults Muslims, who insults African-Americans and women. Needless to say, I am going to do everything in my power and I will work as hard as I can to make sure that Donald Trump does not become president of the United States.

I will, of course, be competing in the D.C. primary which will be held next Tuesday. This is the last primary of the Democratic nominating process. The major point that I will be making to the citizens of the District of Columbia is that I am strongly in favor of D.C. statehood.

The state of Vermont, which I represent, has about the same number of residents that Washington, D.C. has except we have two United States senator and one Congressman with full rights while D.C. does not. That does not make any sense.

Also, I look forward to the full counting of the votes in California, which I suspect will show a much closer vote than the current vote tally. I spoke briefly to Secretary Clinton on Tuesday night and I congratulated her on her very strong campaign. I look forward to meeting with her in the near future to see how we can work together to defeat Donald Trump and create a government which represents all of us and not just the one percent.

Thank you very much.