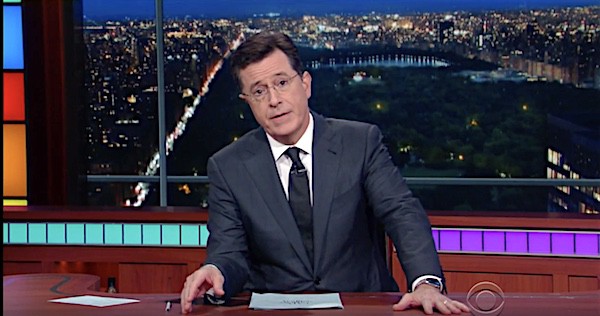 Stephen Colbert began his show last night with a somber and moving monologue about Orlando.

“It’s as if there is a national script that we have learned. And I think by accepting the script we tacitly accept that the script will end the same way every time, with nothing changing. except for the loved ones of the families and the victims for whom nothing will ever be the same. It’s easy, it’s almost tempting to be paralyzed by such a monstrously hateful act, to despair.

“Well I don’t know what to do, but I do know that despair is a victory for hate. Hate wants us to be too weak to change anything. Now these people in Orlando were apparently targeted because of who they love. And there have been outpourings of love throughout the country and around the world. Love in response to hate. Love does not despair. Love makes us strong. Love gives us the courage to act. Love gives us hope that change is possible. Love allows us to change the script. So love your country, love your family, love the families of the victims and the people of Orlando, but let’s remember that love is a verb, and to love means to do something.”

Colbert was joined shortly thereafter by Bill O’Reilly, who wants to do something, but that something has nothing to do with gun control.