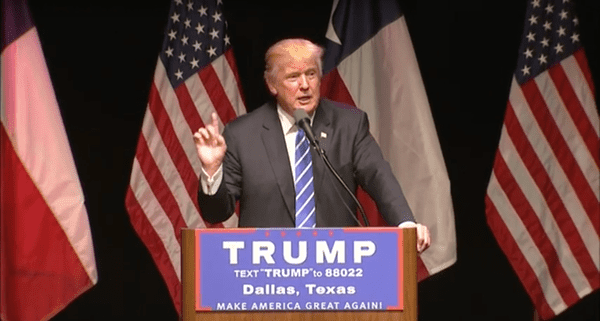 On Thursday, Donald Trump again insisted that he would be better for the LGBT community as president than Hillary Clinton.

As ABC News reports, “Trump said the ‘LGBT community is starting to like Donald Trump very, very much lately,’ and claimed that his Democratic rival, Hillary Clinton, accepts donations from Middle East countries, which oppress LGBT citizens and women.”

Meanwhile, CBS News reports that what Trump actually said was, “LGBT is starting to like Donald Trump very much lately, I will tell you.”

Trump again tried to paint Clinton as bad for the LGBT community because The Clinton Foundation has accepted donations from countries where anti-gay violence exists. “As far as gays are concerned, think of it,” Trump said. “They throw gays off buildings. They kill them. Countries that contribute to her foundation. And she should give all that money back to all these countries.”

Watch videos of Trump at his rally in Texas, below.