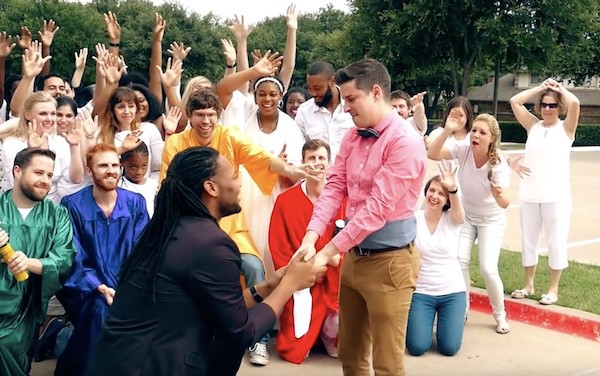 Ready to smile? Laugh? Shed a few tears? Remember what life’s really about?

DeAndre Upshaw planned this intricate and moving marriage proposal to his longtime partner Stu and it is going to make your day.

4 months before this video was filmed, I hatched a plan to propose to my boyfriend of six years, Stu, to celebrate the one year anniversary of the Supreme Court ruling in favor of same sex marriage in Dallas, Texas, where we live. I work in digital marketing and video production, and am also the founder of one of DFW’s most successful improv troupes, so I spent four months using every resource at my disposal to make this an amazing experience for Stu.

I’ve always been fond of the dramatic, so this proposal includes:

I’d known from the day we met that I was going to spend the rest of my life with Stu, and we knew we were going to get married, but figured that after six years of being together we’d just announce an engagement. Never one to miss an opportunity to do the absolute most, I spent four months secretly colluding with family, friends and college roommates across the country to help make this an amazing, special day.

He thought we were going to a fancy brunch, and as we got closer to the location, I pulled over and told him that I’d actually planned something amazing for him, and put a blindfold on him before taking him to the location.

Texas received record amounts of rain and flooding that weekend (something that wasn’t factored into the equation when I set the date four months earlier), so we had to change venue at the last minute in order to have a backup indoor location just in case we got rained out. It even sprinkled briefly during the shoot, but we persevered!

My favorite part is his laugh (Stu has the most unique, adorable laugh) when he sees his friends and family pop out. Some of them he hasn’t seen in years, and some drove in from Austin and Houston.

I chose the song “Closer” by Tegan and Sara because we’d seen them open for fun. back in 2013 and immediately became hooked on the song. I’m very much a Beyonce man and his musical tastes lean more towards OK GO and Brett Dennen, so discovering an anthem that we both loved was very exciting for us! We have a joint Spotify playlist that we both add music to so we can jam out in the bathroom while we’re brushing our teeth or driving. This is the only song that never got skipped!

Another thing that made this kind of super special was that I’d lost 119 pounds over the course of the last few months, and this was the first time some of my friends and family had seen me since! It was a great time 🙂

Some quick notes:
– We live in Dallas, Texas
– The proposal was originally supposed to be in downtown Dallas, but due to the threat of rain and flooding, we moved it to nearby Plano, where we were able to have access to a backup indoor location in case it rained.
– Stu works as a professional illustrator of children’s books, originally from Flower Mound, Texas. He is 28.
– DeAndre is a digital marketing strategist and cinematographer, originally from Houston, Texas. He is 29.
– For the #filmnerds: We filmed this video with two Panasonic GH4’s, one in the backseat of the car on sticks and one with an operator on a Glidecam outside of the car. Stu’s shot was captured with a GoPro 4 clamped to the hood of the car. We also filmed it in 360 with a Ricoh Theta S. Edited in Premiere and Graded with MBL.
– The only people who had rehearsals were the dancers – everyone else (the driver, family and friends, guys in robes, our families) met an hour before we arrived to rehearse on the spot. I kept them in the loop with a production document, a secret Facebook event page and videos from the rehearsals.
– Each group of people that comes on camera is a huge surprise for Stu – some he hadn’t seen in years
– Right before we got to the place where filming was, I pulled over to the side of the road and told Stu we weren’t going to brunch, and put a blindfold on him and a handkerchief in his hand. He was shocked!
– My mother is known for her hats. I’m sure you can spot her when she makes her entrance 🙂

Huge thanks to everyone who helped make this happen!