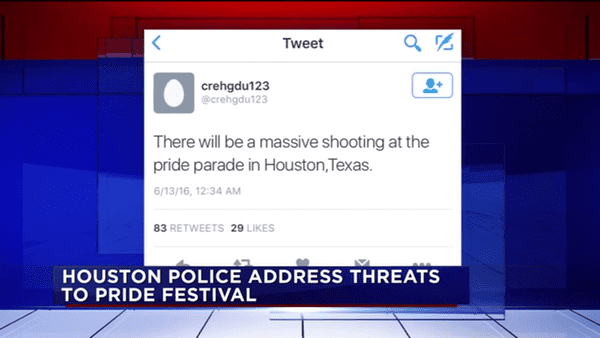 The FBI is investigating a threat made on Twitter against Houston’s upcoming gay pride parade.

On Monday June 13, the day after the Orlando massacre, someone identified only as @crehgdy123 tweeted,”There will be a massive shooting at the pride parade in Houston, Texas.” Houston Police were quick to launch an investigation into the tweet.

Houston’s acting police chief, Martha Montalvo, says the department is aware of a threat posted on social media that there would be a massive shooting at the Pride parade in Houston. […]

She also tells us she had several people come up to her and her officers at Wednesday night’s vigil at City Hall to tell her about the threat. She wants people to keep the information coming about this and any other threat.

“We’re getting additional types of concerning types of tweets and threats,” she says. “Some of it is valid. Some of it is not. But again, even if you don’t think it’s valid send it to us. We need to see it.”

The FBI began its own investigation into the threat shortly after Houston P.D. started looking into the tweet. Currently, the FBI says it has no concrete information regarding a credible threat to Houston’s LGBT community.

Houston’s pride week begins this Sunday June 19. Security at the even has reportedly been boosted out of concern.

Watch a news report from KTRK, below.