2016 ELECTION. Donald Trump claims things are going to change: “I think Corey’s terrific. I watched him before. He was terrific toward me. Said I was a talented person. And he’s a talented person,” Trump said on “The O’Reilly Factor.” “He’s a good guy. He’s a friend of mine. But I think it’s time now for a different kind of a campaign. We ran a small, beautiful, well-unified campaign. It worked very well in the primaries.”

WATCH: @DavidMuir asks @realDonaldTrump why so many Trump products are made overseas.https://t.co/wpqMN595wT

MAD MAN. Trump makes several payments to Draper Sterling ad agency. “In their most recent FEC filing, the Donald Trump campaign revealed that they paid $35,000 to an ad agency that, by all appearances, doesn’t actually exist.”

Who is going break it to him that it's a fictional ad agency?

HE WROTE THE BOOK. Hillary Clinton on Trump: “He’s written a lot of books about business; they all seem to end at Chapter 11.” 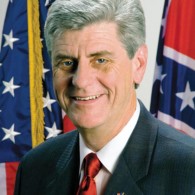 MISSISSIPPI. Federal judge refuses to block state’s anti-LGBT ‘religious freedom’ law: “U.S. District Judge Carlton Reeves argued in his four-page order that since none of the lawsuit’s plaintiffs would be harmed by the law in the immediate future, a preliminary injunction would be inappropriate.”

ANNOUNCEMENTS. Blake Lively says that she and Ryan Reynolds are officially “breeders”.

INCOMING. Michelle Obama to do Carpool Karaoke with James Corden. “CBS has confirmed to Mashable that FLOTUS will be joining Corden on his internet-dominating segment, which airs during the Late Late Show.”

NORTHERN LIGHTS. A new Frozen story is on the way. Will they #GiveElsaAGirlfriend?

ORLANDO. Inside the gay clubs, a week after the shooting: “I went out to gay bars in Orlando on the one-week anniversary of the tragedy hoping to prove that people were overcoming through joyous clubbing; that they were reclaiming a queer space that had taken from them through direct violence. I wanted to gay up my reporting—not just ask people questions, but be with them, dance with them, maybe even hook up with them. But it didn’t really work out. People were too depressed.”

IT HAPPENED. Rick Astley hit #1 again in the UK.

NYT. Gay summer events worth traveling to. “The parades close out Pride month but kick off a busy calendar of events with lesbian, gay, bisexual and transgender themes that are intimate enough, even with added security in place, to balance fellowship with fun.”

HOTTIES. Michael B. Jordan on the beach in Maui.

BLOOD BAN. Senators press FDA to lift discriminatory policy. “Saying the Orlando shooting at a gay nightclub this month highlights a discriminatory federal policy regarding blood donations, U.S. senators Patty Murray and Maria Cantwell on Monday joined the growing call to end restrictions targeting gay and bisexual men, among others. They were among two dozen senators who sent a bipartisan letter to Food and Drug Administration Commissioner Dr. Robert Califf urging the agency to update the agency’s policy that refuses donations from gay and bisexual men who have had sex with another man within the past year.”

BLAST FROM THE PAST. When Chris Pratt was a yummy chubby goofball.

WYOMING. Pinedale municipal judge and circuit court magistrate Ruth Neely can’t refuse to marry gay couples: “Neely’s constitutional rights do not “exempt her from complying with the Wyoming Code of Judicial Conduct, which prohibits such conduct by a judge and to which she swore her oath to abide by as a judicial officer for the State of Wyoming,” the Wyoming Commission on Judicial Conduct and Ethics wrote in a brief filed Wednesday.”

TOO HOT FOR TUESDAY. Vlad Castillo.