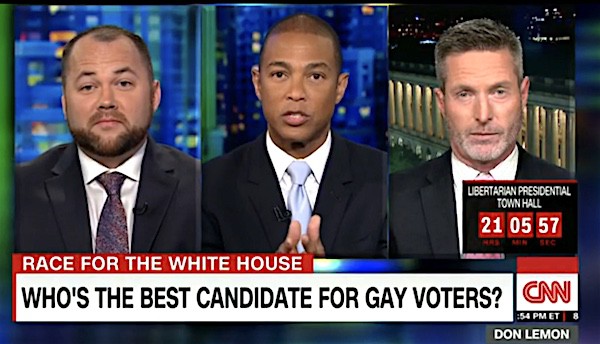 NYC City Councilman (and friend and former Towleroad political director) Corey Johnson has a lot of questions for Chris Barron, founder of the gay conservative group GOProud, who this week launched a “gays for Trump” campaign and once, as Johnson points out, called Trump a “sociopath” on Twitter.

“I think it’s funny that just because [Trump said] the four letters LGBT that [he is] somehow the champion of the LGBT community. He met today in New York with a thousand evangelical leaders – a who’s who of the gay right – people who have made a professional career of demonizing and denigrating gay people. Donald Trump is against marriage equality, Donald Trump says he wants to remake the Supreme court and make it even more conservative. Donald Trump has never been there for the gay community – he is a megalomaniacal, arrogant crazy person.”

RELATED: Donald Trump’s ‘Evangelical Executive Advisory Board’ is a ‘Who’s Who’ of Anti-Gay Figures

When Johnson brought up the fact that Barron once called Trump a “sociopath,” Barron argued that Donald Trump has a business record of protecting people on LGBT rights while Clinton evolved to the issues when it was politically expedient.

“Hillary Clinton is a bigger sociopath than Donald Trump will ever be.”

Don Lemon tried to offer a few questions to Barron to make sense of his nonsensical views, but ultimately Barron left the debate with this:

“I know the left wants to scare gay people into not even thinking about voting for Donald Trump…If you want people to have equal rights and dignity, then talk about combating radical Islam.”

Here's the link to the clip of me on @CNN w/ @donlemon debating Chris Barron on Trump & LGBT people! @dominiclowell https://t.co/7jBSXdOOwQ