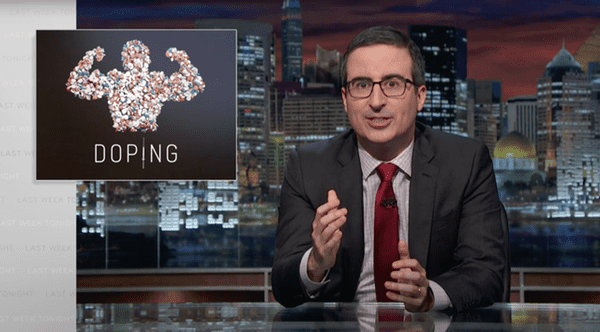 On Sunday’s Last Week Tonight, John Oliver took a deep dive into the recent doping scandals that resulted in the Russian track and field team being banned from competing in the 2016 Olympics.

Oliver broke down the details of how the Russian government, and in particular its spy agency, helped Russian athletes cover up usage of banned performance-enhancing drugs. The scheme reportedly involved a hole in the wall of a testing lab where samples were clandestinely passed through, a hole that Oliver dubbed the world’s first actual ‘glory hole.’

Oliver brought attention to the systemic problems that currently make it impossible for Olympic sports to be free from doping. As one expert pointed out, there doesn’t appear to be an actual desire among international officials to enforce anti-doping policies.

The problems are so bad, that Oliver said the Olympics are actually “making FIFA look good!”

If organizations like the International Olympic Committee (IOC) can’t muster the will to enforce its policies on performance-enhancing drugs, then Oliver suggests that we “at the very least [need to] make our syrupy athlete promos a bit more honest.”

Find out how, below.