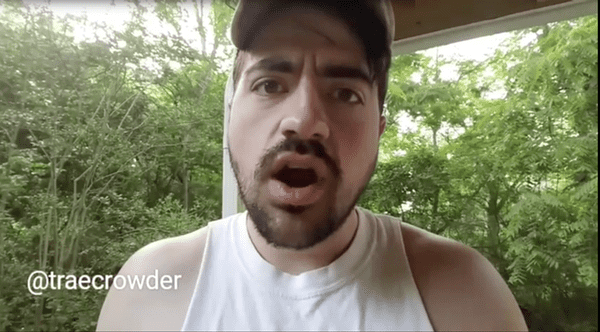 Trae Crowder, aka the ‘Liberal Redneck’, is back and this time taking Donald Trump head on.

Crowder has had enough of Trump’s bigotry and xenophobia. But he cautions liberals against writing Trump off and assuming he will lose the general election. Says Crowder,

“I’m starting to worry about how quickly people on the left are to dismiss him and his legion of misspelled sign toting fans. Look, y’all, I’ve been confused by it too, Because for literally my whole life, this dude has been the Quentin Tarantino of being a rich douche. He has truly revolutionized the form.”

When it comes to trying to understand why poor Americans support Trump, Crowder says it’s not quite as simple as “‘Well, they’re a bunch of ignorant bigots. Trump’s the king bigot. Who wants kombucha?'” Crowder points out that NATFA and free trade hurt a lot of middle class working families in places that now support Trump.

And while Trump is wrong on just about every issue he has weighed in on, Crowder warns against expecting that to get in the Republican’s way. “Right wingers are not about to start letting some trivial sh*t like facts get in the way of how they feel about stuff,” Crowder says. “That’s kind of their whole thing.”