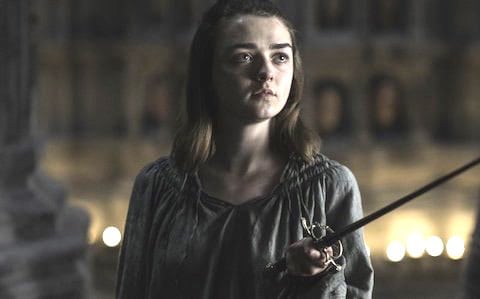 The only way I find any solace or joy in violence is when it’s fictional. While it might seem strange to obsess over a world full of dragons and Faceless Men and reanimated zombie knights while there are so many more important things in the world we should be obsessing over, we all need a little escapism now and then (even if the world of Game of Thrones is the only place that seems more bleak than the world outside these days).

So, if you’re in the mood to indulge in the inconsequential, let’s discuss last night’s Game of Thrones. We didn’t check in with Jon Snow and Sansa in anticipation of next week’s epic Battle of the Bastards taking center stage. That allowed last night’s episode, “No One,” room to settle a few other simmering conflicts, as well as finally bringing an end to the prolonged absences of two fan-favorite female characters.

As Game of Thrones really begins to fold its disparate characters and storylines together, “No One” cleared some space for the larger battles to come.

Even without a large-scale battle last night, the episode wasn’t without its fair share of bloodshed. Whos’s still standing? Find out in our SPOILER-filled Game of Thrones recap below! 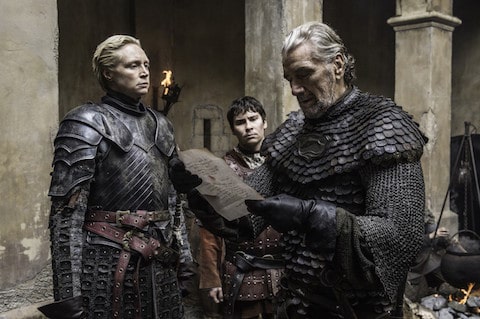 Brienne and Podrick come a-riding into the Lannister/Frey Siegeapalooza Outdoor Music Festival, but before they can drop molly and roll in the mud, Brienne demands an audience with her old friend, Jaime. Brienne offers her buddy his sword back, but Jaime is like, nah, keep it, it’s yours. A real class act, that guy.

Then Brienne pitches a really fun idea. What if, instead of taking the castle by force, they just, I don’t know, let the Blackfish and his men go so they can join up with the Stark army? Wouldn’t that be fun?!

Even though building a bigger Stark army is definitely not in Jaime’s best interest, he figures the Blackfish is such a pain in his beautiful, beautiful rear, she might as well try and convince him to leave the castle. Good luck with that!

Brienne lays out her plan to the Blackfish, but he’s not feeling it. He’s going to stay put right here, thankyouverymuch.

Jaime has a different plan. He pays a visit to Edmure and asks him about his wife and news about his young son and wouldn’t it all be nice to see them again? Because, here’s the deal, Eddy, Jaime is going to take this castle and head home to Cersei one way or another.

So Edmure marches on over to the castle and demands to be let in, as he is in fact the Lord of Riverrun. The Blackfish knows this is clearly a trap, but the Tully army is compelled to follow the orders of the Lord of Riverrun, which, again, is technically Edmure, not Blackfish. Eddy comes in, orders the men to drop their weapons, and then hands the castle over to the Lannisters and Freys.

The Blackfish is no fool, so he leads Brienne and Pod to a tiny escape boat. They beg him to come with him, but he wants to go out fighting and runs away, sword drawn.

The Lannister banners are being hung around the castle, while Jaime spots a tiny boat making its escape carrying Brienne and Pod. He gives them a little wave and lets them go. Another soldier approaches Jaime and tells him that, uh, the Blackfish? Well, he, uh, died in battle.

Suuuuuuure he did. A wily warrior and tactician like the Blackfish? He escaped the Red Wedding, I think he’d make it out of a castle he knows super well with an army I’m sure is still at least partially loyal to him. Come on. 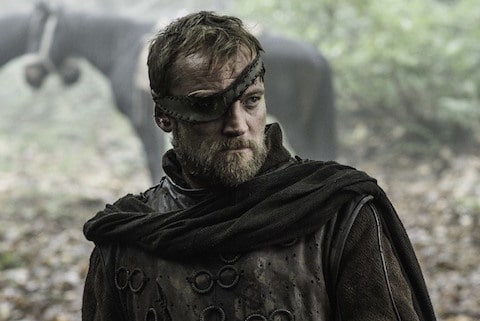 Meanwhile, Elsewhere in the Riverlands …

A group of the Brotherhood Without Banners is hanging out, trading some great tips about how you should finger a dude (hope you all were taking notes) when the Hound comes a-swinging his axe. He makes choppy-choppy on the men and continues on in search of the guy with the fabulous yellow cape that slaughtered all his friends last week.

On he goes until he sets upon some more of the BWOB about to hang the scoundrels that killed Ian McShane and all his buddies. Turns out, the BWOBs that attacked his camp were a rogue group of bandits, and the proper BWOBs are not OK with what they’ve been up to. They agree to let the Hound have the honor of offing two of the three marauders. Once they’re swinging, it seems like the Hound is going to keep hanging around with the rest of the Bros Without Bans, including Thoros of Myr and the oft-resurrected Beric Dondarrion.

Some folks think Thoros’ and Beric’s presences dash the hopes of any Lady Stoneheart reveal, but I still hope she’s coming. (She was mentioned in at least three other conversations earlier in the episode, after all.) 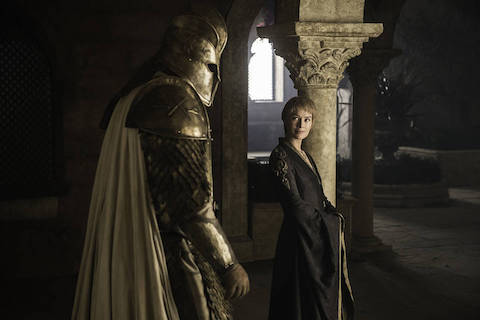 The High Sparrow sends for Cersei, but she rebukes the request with all the grace of a drag queen snapping, “Do not come for me unless I send for you.” Her cousin Lancel and the Sparrows show up to fetch her, but she sicks on the Mountain on one of their men. The Zombie warrior rips off one of their heads, and the others get the message pretty quickly.

Cersei for sure is feelin’ herself after that display, so she marches into the throne room with the Zombie Mountain in tow for a royal announcement. She’s sent to sit in the nosebleeds with the commoners, while her son, King Tommen, announces that trials by combat are so two thousand-and-late, so they are now banned. There goes your swell plan, Cers! (And there goes fans’ hopes to see the Hound face off with his zombie brother the Mountain, at least for now.)

Lucky for Cersei, Qyburn arrives and tells her that the rumor he was investigating for her turns out to be much, much more. What are they talking about exactly? Well, we don’t know for sure, but if this blogger (and, honestly, a lot of the other bloggers out there) had to guess, I think it would have something to do with all that wildfire the Mad King allegedly stashed under the city. If Cersei can’t fight her way out of this with the Zombie Mountain, she might have to follow through on that threat to burn cities to the ground.

Tyrion, Missandai and Grey Worm are having a little Showtime at the Pyramid open-mic jokefest when all those slavers come sailing in attacking Meereen by sea.

It’s not looking good for Tyrion and company as they’re hunkered down in the pyramid, but there’s a sudden thump. It’s a dragon landing, delivering their queen, Daenerys, finally back to clean up this whole mess.

It’s sort of convenient that the slavers are all coming in on a bunch of ships, which, once defeated, could be a really convenient way to transport a bunch of Dothraki to Westeros. Especially if they’re joined by a few more ships from Yara and Theon. Just saying. 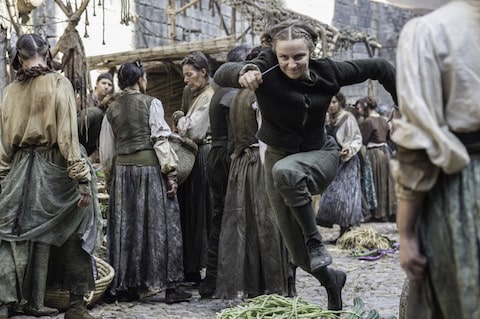 Turns out, Arya is quite the little dramaturge. Lady Crane took her advice about her Cersei character, and it’s turned her performance from Charlize Theron-level to full-out Streep. Braavaa!

When Lady Crane gets backstage, she finds a bloody Arya waiting. Crane patches her up nice (a skill she learned from an abusive relationship wherein she used to put holes in her lover and then feel bad and fix him up). While Arya rests, the Waif attacks, killing Lady Crane and chasing Arya through the streets in one of the coolest sequences we’ve seen on this show.

Alright, maybe it is a little convenient for a severely injured Arya to be able to jump out of windows and slide under carts and generally give a Jason Bourne-level run for it, but it was cool AF to see her scramble as the Waif followed with chilling intensity.

As Arya’s wounds open up, she leaves a trail of blood leading the Waif right to her dark little hideaway. Inside, the Waif thinks she has Arya cornered. Even when Arya grabs her sword, Needle, the Waif isn’t worried. She’s beaten her countless times before. It’s not until Arya kills the lights that it’s clear she had a plan.

After all that time training while blind, Arya’s able to defeat the Waif, bringing her bloody face back to Jaqen. He seems to beam with a bit of pride and tells her, finally, she is no one. Her response? Nah, I’m Arya Stark, bitch, and I’m going home.

Then she double-snaps and does a jumping death drop. JK, that’s just what I did in response to Arya gettin’ her groove back.

What did you think of last night’s Game of Thrones episode?

Previous Post: « Thousands Crowd London Streets, Break Into Song for Orlando Victims – WATCH
Next Post: What Can We Learn from the People Who Knew Orlando Shooter Omar Mateen? »