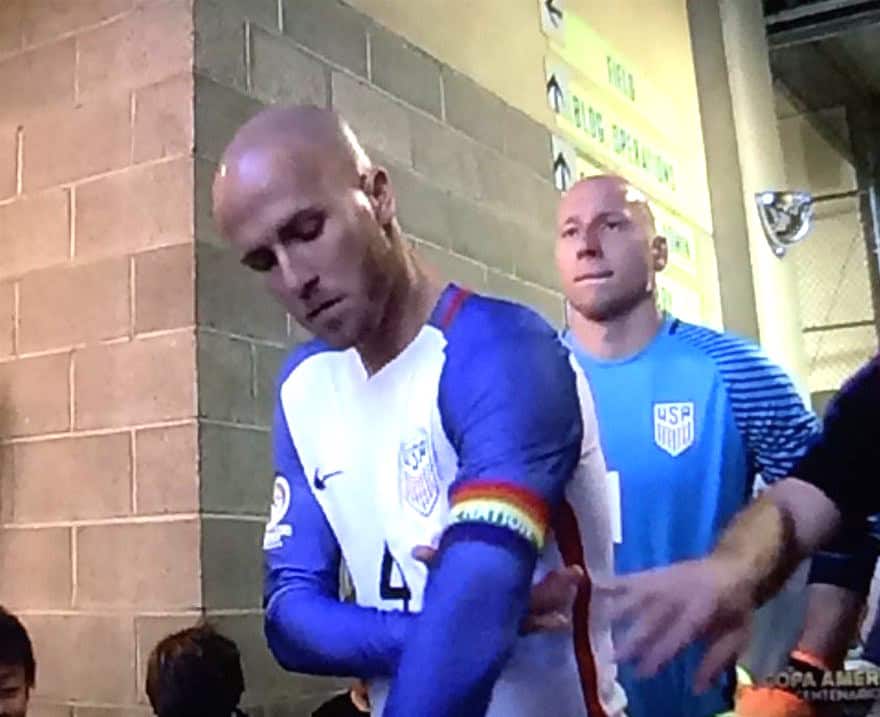 US Men’s National Soccer Team Captain Michael Bradley showed up to a match against Ecuador on Thursday wearing a rainbow armband in support of the LGBT community and the victims of the Orlando massacre.

Rainbow armband on The Captain. Class move by Bradley. pic.twitter.com/YaoYrFGhKY

Outsports’ Cyd Zeigler adds, “Bradley didn’t just wear it for the pre-match ceremony but wore the captain’s arm band throughout the match […].”

Zeigler also blasted media coverage that has minimized if not erased the fact that the Orlando shooting was specifically an attack on the LGBT community. Said Zeigler, “It’s crazy to me that places like Sports Illustrated are reporting about the rainbow band with no reference to the LGBT community. Why can’t the sports world just say the words “gay” and “LGBT” in conjunction with the assault on our community in Orlando?”

Hillary Clinton praised Bradley for wearing the armband, writing on Twitter, “You don’t have to be LGBT to stand with the LGBT community. We all have a stake in equality. Thank you, Michael.”

You don't have to be LGBT to stand with the LGBT community. We all have a stake in equality. Thank you, Michael. https://t.co/EfEMVugWCp

Watch a news report on Bradley’s show of support on the field as well as a video from the USMNT offering their support to the LGBT community and the victims of the Orlando massacre, below.

Previous Post: « Uber Is Offering Free Rides to LGBTQ Centers and Sites This Weekend
Next Post: Hillary Clinton on Donald Trump’s Claim That He’s Better for ‘The Gays’: ‘Yeah, No’ – WATCH »