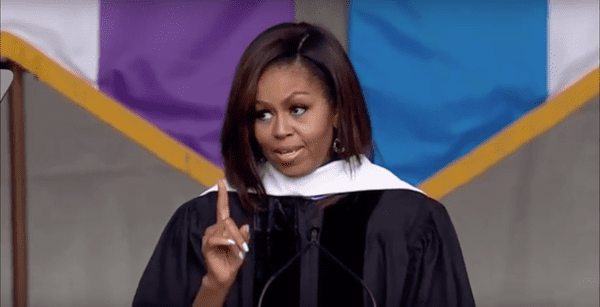 Delivering a commencement address at City College New York on Friday, First Lady Michelle Obama rebuked Donald Trump without even having to mention him by name. To those in attendance, however, the subject of the First Lady’s ire was all but clear.

[Some folks out there today] seem to view our diversity as a threat to be contained rather than as a resource to be tapped. They tell us to be afraid of those who are different, to be suspicious of those with whom we disagree. They act as if name-calling is an acceptable substitute for thoughtful debate. As if anger and intolerance should be our default state rather than optimism and openness that have always been the engine of our progress.

But graduates, I can tell you that as First Lady, I have had the privilege of traveling around the world, and visiting dozens of different countries, and I have seen what happens when ideas like these take hold. I have seen how leaders rule by intimidation, leaders who demonize and dehumanize entire groups of people often do so because they have nothing else to offer. And I have seen how places that stifle the voices and dismiss the potential of their citizens are diminished, how they are less vital, less hopeful, less free.

Graduates that is not who we are. That is not what this country stands for. No, no, here in America, we don’t let our differences tear us apart. Not here.

The first lady then ticked through a list of cultural and historical landmarks created by people who were not born in the United States, including Google, eBay, the artificial heart, the telephone, blue jeans, Russian-born Irving Berlin’s “God Bless America,” the Brooklyn Bridge and the White House.

The greatness of the United States, she mused, has “never come from folks who climbed the ladder of success or who happened to be born near the top and then pulled the ladder up after themselves.”

“No, uh-uh,” she continued, to applause. “Our greatness has always come from people who expect nothing and take nothing for granted, folks who work hard for what they have and then reach back and help others after them. That is your story, graduates, and that is the story of your families. And it’s the story of my family, too.”

Speaking of the historic nature of her husband’s presidency, a presidency which Mr. Trump has sought to delegitimize, Mrs. Obama added,

“And graduates, it’s the story that I witness every single day when I wake up in a house that was built by slaves, and I watch my daughters, two beautiful black young women head off to school waving goodbye to their father, the president of the United States, the son of a man from Kenya who came here to America for the same reasons as many of you: to get an education and improve his prospects in life.”

Watch the speech, below.