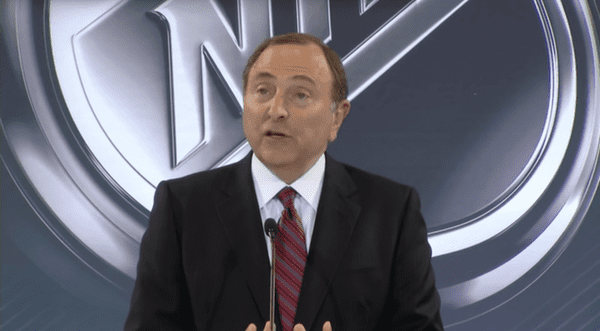 “I think it’s very difficult to generalize as to why in a particular league or a particular industry somebody has or has not come out,” Bettman said in a phone interview Tuesday. “We certainly don’t want a player to come out for our sake. It should be what’s right for him and something that he has to be comfortable with. But I think it’s our job to create a culture and an environment where a gay player knows he is safe and welcome. If and when that happens, believe me, that person will have the full support of the commissioner’s office.”

Bettman also says he hopes to eliminate gay slurs from the vernacular used by NHL players, which is part of the reason why the NHL acted so swiftly in suspending and fining Blackhawks player Andrew Shaw for calling a ref a “faggot” during a game. Says Bettman,

“You want to eliminate the use of the word, but the fact is, what you do in response to set the right tone in terms of what’s acceptable is more important than the word itself. So making clear, in a strong, clear prompt way that this is not acceptable I hope transcends the use of the word itself. I mean, the word is symbolic and the suspension was symbolic, but what I’m hoping the suspension relayed to people was that type of belief, that kind of culture is not acceptable in the NHL.”

Bettman insists that an openly gay player would be judged for his skills as an athlete not on his sexual orientation:

“I believe certainly in the NHL a player who can help a team win because he can contribute on the ice is going to be coveted whatever his beliefs may be or whoever he may be,” Bettman said. “That goes to national origin, religious beliefs or sexuality. Our teams want to win. Secondly, what we have tried to instill across the league through ownership and management is that we stand for inclusiveness and to judge somebody on the merits.”

Patrick Burke, founder of the You Can Play Project, an organization dedicated to the eradication of homophobia in sports, says that top players in the NHL are ready to support an openly gay player:

“They’re the best players in our league, best leaders in our league and every one of them said the same thing — what else do I need to do or help or show support?” Burke said. “There’s no hesitation on the part of our elite players and our league office to support and accept an openly gay player.”