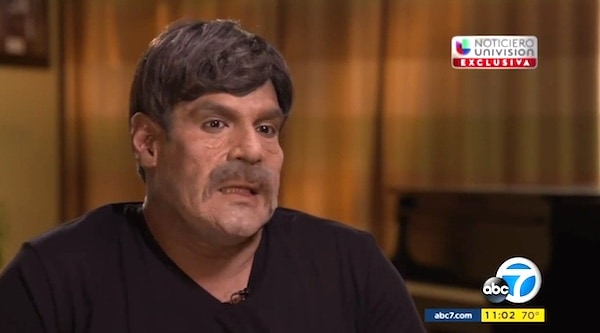 A man claiming to be Orlando shooter Omar Mateen’s lover has come forward and would only agree to an interview in disguise, says the two men met on Grindr, and told Univision that the Orlando massacre was revenge, not terrorism, and that Mateen bore grudges against the Latino men he met there for using him, Univision reports:

“I’ve cried like you have no idea. But the thing that makes me want to tell the truth is that he didn’t do it for terrorism. In my opinion he did it for revenge,” he told Univision Noticias anchor Maria Elena Salinas in an exclusive interview in English and Spanish on Tuesday.

He said Mateen was angry and upset after a man he had sex with later revealed he was infected with the HIV virus.

Asked why he decided to come forward with his story, he said: “It’s my responsibility as a citizen of the United States and a gay man.”

The man said he had approached the FBI and been interviewed three times in person by agents. Univision was unable to independently verify his account. The FBI confirmed to Univision that it had met with him.

Watch part of the interview with “Miguel” on ABC 7.:

Watch the full interview at Univision.

“Miguel” claims that Mateen was “cuddly”, was against the U.S. war on terror, and believed that his marriage was a “smoke screen” to hide his homosexuality. Miguel claimed the two met at Parliament House, another gay club, and were “friends with benefits”, meeting 15-20 times, the latest in December.

He said he believed Mateen’s second wife knew he frequented gay bars and that his marriage was a smoke screen to hide that he was “100 percent” gay.

“He adored Latinos, gay Latinos, with brown skin – but he felt rejected. He felt used by them – there were moments in the Pulse nightclub that made him feel really bad. Guys used him. That really affected him,” Miguel said. “I believe this crazy horrible thing he did – that was revenge.”

Mateen expressed frustration over his father’s extreme views on homosexuality, which included a belief that “gay people [are] the devil and gay people have to die,” Miguel said.

Miguel said Mateen undertook the massacre as revenge for rejection by gay Puerto Ricans and anger that he had been exposed to HIV:

“When I asked him what he was going to do now, his answer was ‘I’m going to make them pay for what they did to me.'”