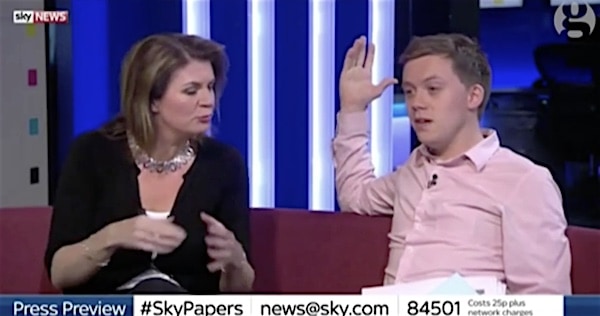 Gay Guardian journalist Owen Jones stormed off the set of SkyPapers, a show which digests headlines from around the world, after his co-hosts would not acknowledge that the attacks on Orlando’s Pulse nightclub were specifically targeted at LGBT people.

Wrote Jones in The Guardian:

I am reluctant to dwell too much on my appearance on Sky News last night, because this isn’t about me, so let’s just use it as a case study. In sum, I walked off in disgust during a discussion about the massacre: it was an instinctive reaction to an unpleasant and untenable situation. The presenter continually and repeatedly refused to accept that this was an attack on LGBT people. This was an attack “against human beings”, he said, and “the freedom of all people to try to enjoy themselves”. He not only refused to accept it as an attack on LGBT people, but was increasingly agitated that I – as a gay man – would claim it as such.

If a terrorist with a track record of expressing hatred of and disgust at Jewish people had walked into a synagogue and murdered 50 Jewish people, we would rightly describe it as both terrorism and an antisemitic attack. If a Jewish guest on television had tried to describe it as such, it would be disgraceful if they were not only contradicted, but shouted down as they did so. But this is what happened on Sky News with a gay man talking about the mass murder of LGBT people.

This isn’t about LGBT people taking ownership of the pain and anguish. People of all sexual orientations have wept over this massacre, and all communities should unite in grief.

LGBT people are varied, and have different experiences: the life experiences of a young working-class gay black woman and a gay white male multi-millionaire CEO are very different. But we all grow up in a society that still treats us as if we are inferior: we have all repeatedly encountered homophobic abuse, the stress of coming out repeatedly, or the fear of holding hands with a partner in public. To imagine LGBT people who may have endured distress and internalised prejudice – just because of who they are – spending their last moments in terror as a homophobic terrorist hunted them down is just unbearable.

Today, the “we only care about LGBT rights if Muslims are involved” brigade are out in force. As a gay man, I am proud to live in a city represented by a Muslim mayor who has faced death threats for supporting and voting for LGBT people to have the same rights as everybody else. The bigots must not be allowed to hijack this atrocity.