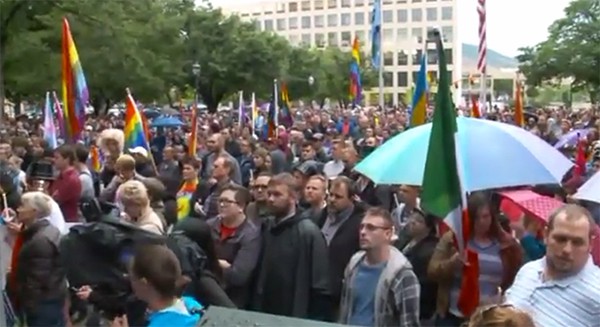 More than 1,000 people gathered in downtown Salt Lake City on Monday for a vigil in support of the Orlando victims. Utah Lieutenant Governor Spencer Cox was one of the speakers, and he gave a moving and heartfelt speech that surprised a lot of people. The speech has since gone viral.

Cox is a Republican who endorsed Ted Cruz for president, and who comes from a deep red state — one of 12 states suing the Obama administration over the transgender bathroom directive. He was never really an ally of the LGBTQ community, but the horror in Orlando made his heart change.

Cox was invited to the vigil by openly gay Utah State Senator Jim Dabakis and he seemed genuinely thankful to be there. He started by telling the crowd that he wanted to apologize to the LGBTQ community.

There were some kids in my class that were different. Sometimes I wasn’t kind to them. I didn’t know it at the time, but I know now that they were gay. I will forever regret not treating them with the kindness, dignity and respect — the love — that they deserved. For that, I sincerely and humbly apologize.

Over the intervening years, my heart has changed. It has changed because of you. It has changed because I have gotten to know many of you. You have been patient with me. You helped me learn the right letters of the alphabet in the right order even though you keep adding new ones. You have been kind to me. Jim Dabakis even told me I dressed nice once, even though I know he was lying. You have treated me with the kindness, dignity, and respect — the love — that I very often did NOT deserve. And it has made me love you.

He said that he we are not at a crossroad of “hate and terror,” and that there’s no easy solution for it. But we need to try and find one together, leaving politics out of it. “Today we need fewer Republicans and fewer Democrats. Today we need more Americans.” And he ended the powerful 9-minute speech with a call-to-action:

And so may we leave today, with a resolve to be a little kinder. May we try to listen more and talk less. May we forgive someone that has wronged us. And perhaps, most importantly, try to love someone that is different than us. For my straight friends, might I suggest starting with someone who is gay.

Cox appeared on Andrea Mitchell Reports on Thursday to discuss the viral response to his speech on Monday in the wake of the Orlando shooting.

Said Cox, “I didn’t want it to be a political speech. I wanted to share what was in my heart.” He added, “I think it’s pretty sad that a speech by a Lieutenant Governor in Utah is getting this much attention just by saying we should love each other. How low is the bar in our country?”

You can read the full transcript from KSL and check out the video below:

Also, watch video of Cox speaking to Andrea Mitchell on Thursday, below.