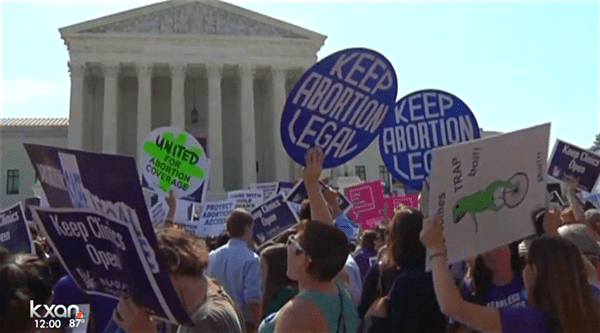 Justice Breyer’s opinion in Whole Women’s Health v. Hellerstedt is going to be a lasting victory for choice. It will also mark the end of the post-Tea Party Republican wave in the states that has spent too much of its time making it difficult-to-impossible for women to exercise their constitutional rights. For good measure, Justice Ginsburg added a sharp rebuke in her concurrence that will, over the next few years, unravel a main line of attack on women’s rights: pretextual regulation of abortion providers to protect against nonexistent threats to women’s health, or, so-called TRAP laws (targeted regulation of abortion providers).

Roe v. Wade established that women have a constitutionally-protected right to decide to terminate a pregnancy. Planned Parent v. Casey, another abortion case a little over a decade later, said that certain rules regulating abortion are okay unless they place an “undue burden” on women. What precisely qualifies as an “undue burden” is really anyone’s guess. So, Republicans have been taking advantage of the lack of clarity, together with a conservative Supreme Court (with Scalia) and the party’s takeover of many states since 2010, to pass a slew of abortion restrictions. 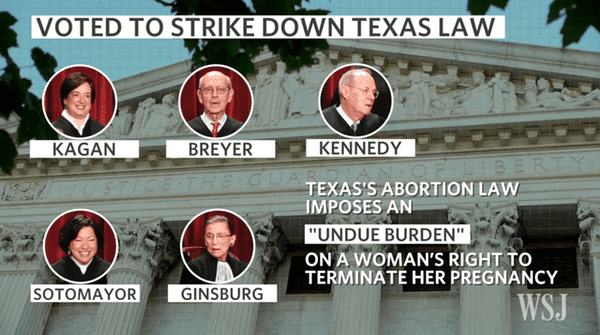 Hellerstedt is about some of those restrictions. The case involved a series of rules passed by the Texas state legislature and signed into law by former Governor Rick Perry in 2013. The law, HB 2 (unrelated to the other HB 2 in North Carolina), required abortion providers to meet the same standards as surgical centers and to have admitting privileges at a hospital within 30 miles. Texas claimed that these rules were necessary to protect against dangerous and risky complications when women seek abortions. In fact, they would have had the effect of closing all but 10 abortion providers in the entire (enormous) state of Texas. The rules are also unnecessary. As an amicus brief from the American College of Obstetricians and Gynecologists showed, complications from abortions are rare and rarely dangerous. We are more likely to experience worse complications when we get our tonsils out or have colonoscopies to check for colon cancer. And yet, Texas allows its residents to have surgery in dentists’ offices and colonoscopies in gastroenterologists’ offices. So, one wonders, why all the focus on abortion?

Because Texas’s evangelical Christian leadership — its lieutenant governor said gays deserved to die after the Orlando shooting — doesn’t like abortion and, like many other Republican-controlled states in the last five years, has tried to pass seemingly generally applicable safety laws to kill abortion by a thousand cuts. We call them TRAP laws because that’s what they are: TRAP may stand for Targeted Regulation of Abortion Providers, but they are “traps” for women and “traps” for the law. They don’t address women’s health; they are clever, sneaky, venial responses to religiously-inspired distaste for a woman’s right to choose.

More than 25% of all state-level abortion restrictions since Roe have been passed in the last five years. That time period coincides with the Tea Party-fueled Republican take over of many state legislatures and governorships. And for a movement that spent a lot of PR time claiming it cared only about things like the national debt, jobs, and screaming about how much they hate health care, its elected officials spent much more time on the bread and butter social issues of the radical right. But these TRAP laws don’t outright ban abortion. Instead, they mandate waiting periods for women seeking abortions, require women to be lectured to by a (usually male) doctor about the consequences of abortion, specify times when abortions are allowed, and even impose architectural and design requirements on abortion clinics. Twenty-two states require abortion clinics to meet the same standards as ambulatory surgical centers; 10 states require clinics to be within a certain number of miles from hospitals; 5 require providers to have admitting privileges at hospitals. Any one of these impositions are offensive; all have the effect of making safe and legal abortion harder to get.

The TX TRAP laws that #SCOTUS struck down are also the most common abortion restrictions. https://t.co/BdkD7qrHSs pic.twitter.com/ThDlaTfrEN

Hellerstedt does not immediately overturn these laws. The decision was not that sweeping, and many of these laws are different in how much and how many burdens and regulations they impose. The undue burden standard is, if anything, a standard about degrees, so some restrictions may stand in the future. But not many.  “Targeted Regulation of Abortion Providers laws like HB 2 that ‘do little or nothing for health, but rather strew impediments to abortion,’” Ginsburg concluded, quoting Judge Richard Posner, “cannot survive judicial inspection.”

In other words, stop using “women’s health” as a pretext for making abortion impossible. It’s a new day at the Supreme Court, and a good one for personal liberty.