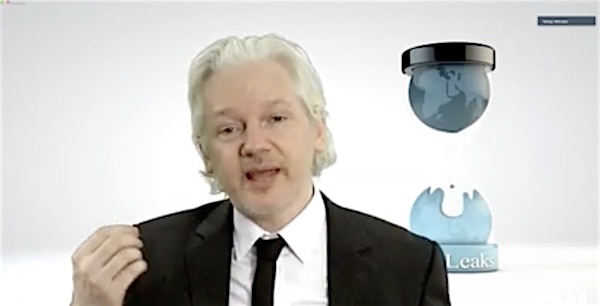 Russia is likely likely behind the hack of DNC emails, U.S. spy agencies say but Wikileaks founder Julian Assange will neither confirm nor deny that assertion.

“The assessment by the intelligence community of Russian involvement in the D.N.C. hack, which largely echoes the findings of private cybersecurity firms that have examined the electronic fingerprints left by the intruders, leaves President Obama and his national security aides with a difficult diplomatic and political decision: Whether to publicly accuse the government of President Vladimir V. Putin with engineering the hack.”

The NYT notes in a separate article that Wikileaks founder Julian Assange told ITV in June that he had the emails and that the timed them specifically to harm her before the Democratic Convention as revenge:

In the interview, Mr. Assange told a British television host, Robert Peston of the ITV network, that his organization had obtained “emails related to Hillary Clinton which are pending publication,” which he pronounced “great.” He also suggested that he not only opposed her candidacy on policy grounds, but also saw her as a personal foe.

First, citing his “personal perspective,” Mr. Assange accused Mrs. Clinton of having been among those pushing to indict him after WikiLeaks disseminated a quarter of a million diplomatic cables during her tenure as secretary of state…

…In addition, Mr. Assange criticized Mrs. Clinton for pushing to intervene in Libya in 2011 when Col. Muammar el-Qaddafi was cracking down on Arab Spring protesters; he said that the result of the NATO air war was Libya’s collapse into anarchy, enabling the Islamic State to flourish.

Assange said, when asked if he’d prefer Trump as president, that Trump is “unpredictable” while Clinton isn’t.

In an interview with CNN on Tuesday, Assange would not confirm nor deny that the Russian government hacked and is the source of the emails, The Hill reports:

“What we have right now is the Hillary Clinton campaign using a speculative allegation about hacks that have occurred in the past to try and divert attention from our emails, another separate issue that WikiLeaks has published,” he said.

“I think this raises a very serious question, which is that the natural instincts of Hillary Clinton and the people around her, that when confronted with a serious domestic political scandal, that she tries to blame the Russians, blame the Chinese, etc,” Assange added. “If she does that when she’s in government, that’s a political, managerial style that can lead to conflict.”

Assange said WikiLeaks would neither confirm nor deny that Russia was behind the theft of the controversial private communications.