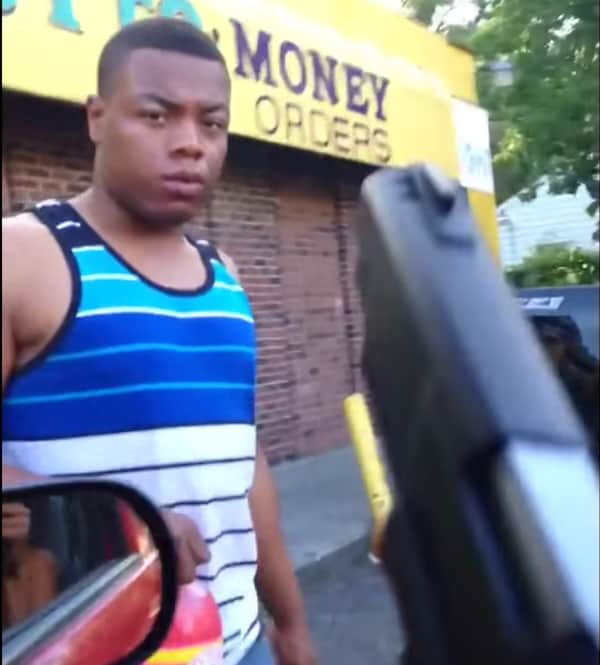 Thousands of people shared a Twitter post earlier this week in which a Detroit man was threatened with a gun on video and mocked for being “gay”. The video has spurred an investigation by police, the Detroit Free Press reports:

“We are aware of it,” said Detroit Police Sgt. Michael Woody. “It was sent to us and we have opened up an investigation on behalf of the victim, although the victim did not come forward. We are investigating it. Obviously, it’s very troubling that anyone would feel comfortable enough to point a weapon at anyone and post it on social media for everyone to see and attacking and singling out a person … regardless of how they identify is outrageous.”

The 32-second video was initially posted at 8:16 p.m. Tuesday and shows a man sitting in a car at the Brightmoor Liquor store, at 22002 Lyndon St., uttering gay slurs. When the second man walks out of the convenience store, the man in the car shouts “Yo” at him to get his attention. The man ignores him initially, but as he passes the window of the car, the man in the car points a gun at him at the 22-second mark of the video while saying, “Take those pants off, bro. What the f–k you on?”

The video, first posted to Twitter, has since been taken down, but not before copies of it found their way to YouTube. And the man who used the gun spoke out about it, and was praised by some Twitter users:

The @Binswanson account posted a live Periscope video Wednesday on Twitter confirming he brandished the gun at the man, took questions from Periscope users and said more gay slurs. Many Twitter users blasted the man who shared the video and pointed the gun at the man. Others laughed and congratulated him for what he did.

Previous Post: « George Takei Sets the Record Straight on ‘Gay Sulu’ Remarks and Why He’s Being a ‘Sourpuss’
Next Post: Ariana Grande and Jimmy Fallon Perform Snapchat Duet of ‘Into You’ – WATCH »