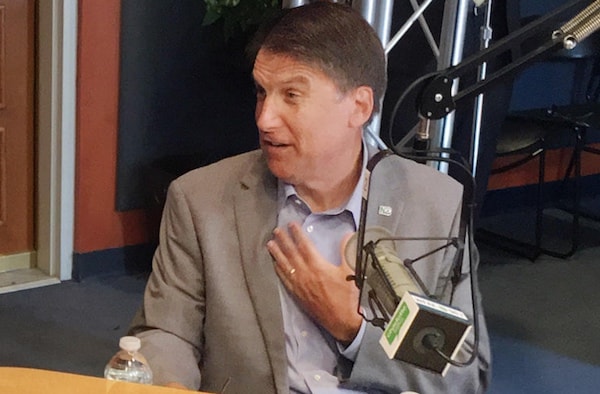 North Carolina Pat McCrory is pissed that the NBA took action against the state’s discriminatory anti-LGBT HB2 law and pulled its All-Star Game from Charlotte.

He reacted in an interview with Charlotte’ NPR affiliate WFAE on Charlotte Talks:

“I’m disappointed. I strongly disagree with their decision. To put it bluntly it’s total P.C. BS. It’s an insult to our city. It’s an insult to our state. And I think it sets a dangerous precedent of the corporate sports and entertainment elite basically asking for a quid pro quo on legislation or else they’ll deny their service. I don’t think that’s the way we should do business and I don’t think that’s the way the political system should run.”

Regarding the way the political system runs, if you’ll recall, the way HB 2 was passed was in a rushed special session called by Republicans hours after the bill was created that cost taxpayers $42,000 so that they could get HB2 in place before Charlotte’s LGBT nondiscrimination bill went into effect and avoid adequate public debate.

Is that the way the political system should run?

McCrory was later asked if the NBA, in addition to having issues with the transgender bathroom aspect of the law, might have also taken issue with the fact that HB2 bans all local LGBT nondiscrimination statutes in the state.

McCrory says that when the NBA made their decision to come to Charlotte that the city did not have those protections.

“When I stood up and recruited the NBA All Star game the city of Charlotte didn’t even have those protections. That was in July of 2015.”

McCrory fails to mention that though it failed once, Charlotte later passed their LGBT nondiscrimination ordinance and it was Republican outrage over that which inspired the rushed special session to pass HB2.