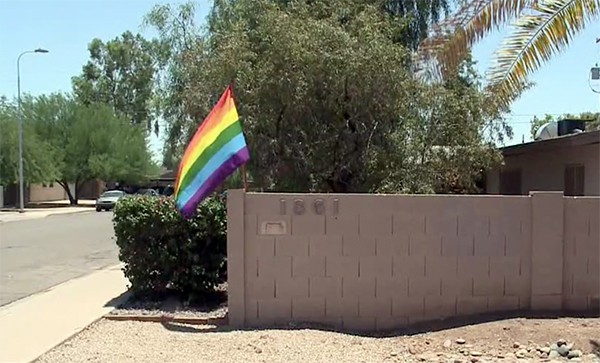 A man in Tempe, Arizona said his landlord asked him to take a Pride flag down, because of the “negative” reactions it could promote. 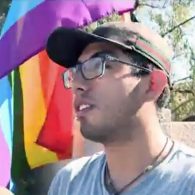 Openly gay Nano Rodriguez, 22, put up the flag outside his rented house because he wanted to show solidarity with the victims of the Orlando massacre last month. “I don’t really know how, but it just gave me some sort of comfort to be able to show my support,” he told 12 News, a local Phoenix, AZ TV station affiliated with NBC.

Apparently, his landlord doesn’t feel the same way. In a letter to Rodriguez, she explained why:  “As stated in terms of your lease,” she wrote, “the property is to be kept clean, safe and carefully maintained. I realize this does not refer specifically to flags, so I would like to clarify. In managing this property I have a responsibility for the safety of all the tenants and property. The nature of the flag you are displaying could unfortunately promote negative reactions and possibly harmful retaliation to tenants and property.”

Ironically, Pride Guide Arizona calls Tempe “one of the most LGBT friendly cities in Arizona.”

The City of Tempe’s anti-discrimination ordinance states that it is unlawful to discriminate on the basis of, among things, gender identity and sexual orientation. The city “takes great pride in being a welcoming, diverse and inclusive community.  The Diversity Office at the City of Tempe is available to assist in preventing and/or correcting acts of discrimination.”

For the last two years, the Human Rights Campaign Foundation’s annual Municipal Equality Index (MEI) awarded The City of Tempe with a perfect score of 100. The MEI examines the laws, policies, and services of municipalities and rates them on the basis of their inclusivity of LGBTQ people who live and work there. In 2015, it analyzed a total of 408 cities of all 50 states.

Rodriguez said he plans on keeping the flag exactly where it is. “I’m not looking to press charges or do anything drastic. I honestly just want to be able to fly the flag, and that’s it,” he said.