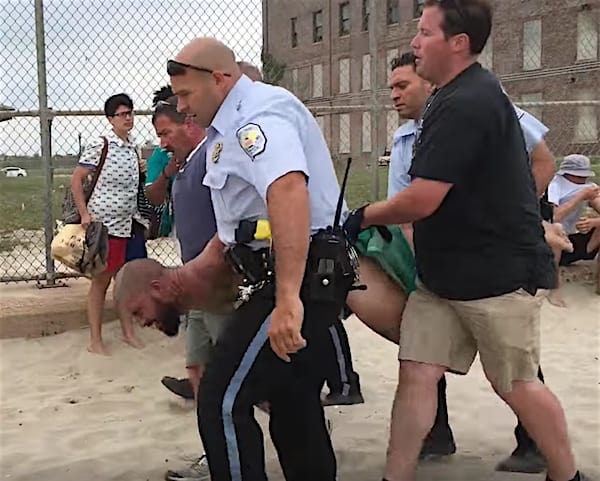 Krys Fox, a 37-year-old NYC photographer, was spending the 4th of July holiday at Riis Beach in the Queens borough of New York City. The beach is known as a destination and safe place for LGBT people, and also for its tolerance of nude sunbathers.

But that tolerance may be evaporating. On Monday, Fox was photographing a friend at the beach when his towel slipped off, and Fox found himself suddenly surrounded by police officers, DNA Info reports:

He said during the photo shoot in the area — a favorite location for him — his towel fell down, which he didn’t consider a big deal because the beach has had a clothing-optional reputation for decades.

“I thought it was a clothing optional beach,” said Fox, who lives in East Flatbush and said Riis Park is his “special place” — so much so that he got married there and visits frequently throughout the summer.

But he said within seconds he was tackled by undercover National Park Service officers who he said didn’t say a word until after they shoved his face into the sand.

“They shoved my face in the sand in front of hundreds of people, I was humiliated,” he said. “I got an arm around my neck and they threw me to the floor and was literally surrounded by like 11 cops.

“They didn’t read me my rights, they handcuffed me.”

Fox was carried off the beach by a group of officers in front of crowds of people while screaming “help me! please help me! Film this. Please film this!”

A bystander, Mariel Reyes, captured the whole scene on video. She described the incident as, “Absurd, excessive, f**king ridiculous.”

“It’s the worst moment of my life,” Fox said. “My biggest problem is that Riis is my safe space and I’ve been going there for almost a decade. I got married in 2011 almost exactly where I was arrested. I shoot there all summer long and was working on a photo project I was devoting to the Orlando victims.”

Fox has never been arrested before or had any run-ins with the law. “I’ve never even gotten a ticket,’ he said.

The officers were supposed to be focused on illegal vendors and narcotics, according to the National Park Service. DNA adds:

NPS officials said a plainclothes officer observed Fox nude and standing by the fence and went over to ask him to cover up. They said he refused to do so, and did not have any ID, and the officer arrested Fox after he became “uncooperative.”

Fox was charged with disorderly conduct and public nudity, officials said. They said he will either be asked to pay a fine or appear in federal court.

Nude sunbathing was made illegal by state law in 1983, but so rarely enforced that Riis Park has become known as a safe destination for those who wish to do so. Fox says he spent three hours in a jail cell after the arrest.

Watch video of the arrest:

Fox posted a photo of himself relaxing at the beach to Facebook on Tuesday.

Said Fox: “I’m still an American. And I still love my country. No matter what. But I’m going offline for a while::: I’m overwhelmed and need to rest..” 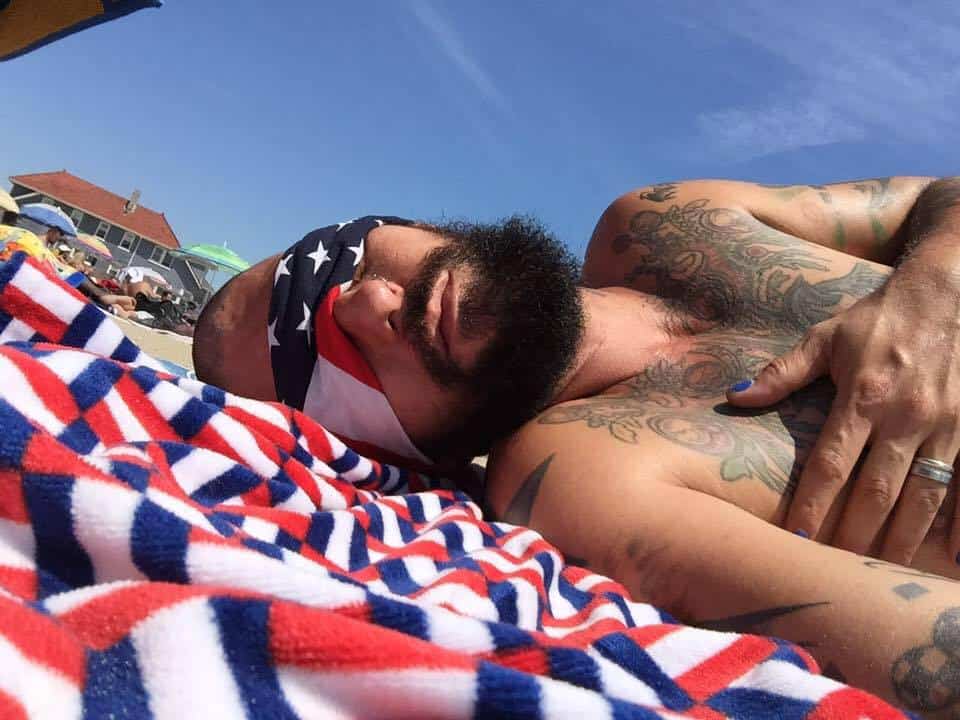 “Jacob Riis Park has been a safe and peaceful haven for LGBT beachgoers for decades. I find any harassment of beachgoers at Jacob Riis and the overwhelming display of force demonstrated by the United States Park Police yesterday to be utterly repugnant. It also seems to be an enormous diversion of resources. I’d hazard a guess that our police have more pressing concerns in this day and age than arresting a nude sunbather at a gay beach.

“The National Parks Police should be ashamed. Just last week we designated Stonewall as a National Monument. Based on news accounts, I hope the police apologize to Mr. Fox and any pending charges against him are dropped.”